The Pokémon Company has revealed a brand-new expansion for the Pokémon Trading Card Game (Pokémon TCG) as part of the latest Sword & Shield line. Read on below to learn more:

Take an early look at some of the incredible new cards to be found in the latest expansion.

The next Pokémon Trading Card Game expansion, Shining Fates, is almost here. This latest set features over 190 cards and more than 100 Shiny Pokémon that will look incredible in your deck. There are also over 30 Pokémon V and Pokémon VMAX that look awesome and can dish out some punishment to your opponents. We’ve already taken a look at some of the cool cards that you’ll find in Pokémon TCG: Shining Fates, but we wanted to give you one more preview of what you can find before the expansion arrives on February 19, 2021. 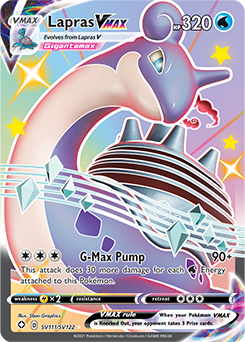 Looking large and lovely, this Shiny Lapras VMAX is raring for battle in all its Gigantamax glory. With its impressive 320 HP, your opponents are going to have their hands full when they try to Knock Out this Pokémon. And if you bring Lapras VMAX into action, make sure you have plenty of Water Energy on hand: Although its G-Max Pump attack requires three Colorless Energy to use, the attack does an extra 30 damage for every Water Energy attached to the Pokémon. With three Water Energy, the attack’s power increases from 90 damage to a significantly more substantial 180 damage. And if you attach a few extra Water Energy to Lapras VMAX? Well, the battle could end up being a wash for your opponent. 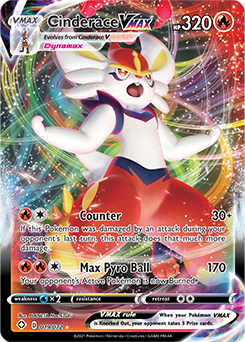 Look out! Cinderace VMAX appears to be hopping mad, and we’re thinking the action is going to heat up quickly. If your opponent dares to do any damage to this mighty Dynamax Pokémon, it can strike back with its Counter attack. This move hits your foe for the same amount of damage they did to Cinderace VMAX during their last turn, plus 30 extra damage. That’ll teach ’em! Or if you’re feeling really fired up, you can unleash Cinderace VMAX’s Max Pyro Ball attack, which not only does 170 damage but also makes your opponent’s Active Pokémon Burned. Unless they get a lucky coin flip, they’ll continue to take damage as the match continues.

Busting out in formal grays amidst a starburst background that’s favored by its fellow Shiny Pokémon, Bunnelby looks like it’s ready for fun. Clearly a social Pokémon, Bunnelby has the returning Mad Party attack, which allows it to benefit from hanging out with Pokémon that share its interests. After all, there ain’t no party like a Mad Party party, ’cause a Mad Party party does 20 damage for each Pokémon in your discard pile that also has the Mad Party attack.

This dapper Pokémon is looking sharp and ready to step out on the town in all its Shiny splendor. Aside from its stylish appearance, Galarian Mr. Rime’s Shuffle Dance Ability will keep your opponent on their toes by allowing you to switch one of their face-down Prize cards with the top card of their deck once during your turn. And like Bunnelby, Galarian Mr. Rime has been invited to the Mad Party. However, as a Stage 1 Pokémon that requires you to play Galarian Mr. Mime before bringing it into play, this Pokémon might better serve your team by supporting Bunnelby from the discard pile than by waiting to get onto your Bench.

This Shiny Corviknight is showing off its mighty wingspan, which—along with its dour color scheme—is sure to intimidate its opponents. But what opponents should really be intimidated by is the Pokémon’s Iron Wings attack. For the cost of one Metal Energy and two Colorless Energy, this powerful move does 130 damage. Plus, you can choose to discard two Energy from Corviknight, and it will take 100 less damage from attacks during your opponent’s next turn.

These are some mighty impressive cards to be sure, and you’re bound to find plenty more favorites when Pokémon TCG: Shining Fates releases on February 19, 2021.