A different kind of holiday card to exchange and display! 🎄😉

Do you have any #PokemonTCG that get you in the mood for the holidays? pic.twitter.com/k0OrpfSK6U

Take a look at some of the amazing artwork you’ll find in the latest Pokémon TCG expansion.

When a new Pokémon Trading Card Game expansion is released, we feel it’s important to take a moment to celebrate the wonderful new artwork that can be found within. Now that Sword & Shield—Fusion Strike has arrived, join us for a bit of art appreciation. You just might discover a new favorite artist or a cool card that you’ll want to add to your collection! 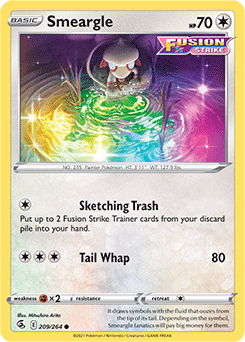 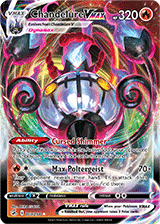 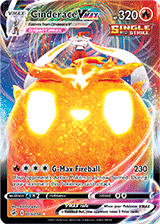 Want to draw attention to a Pokémon TCG card? A splash of color can go a long way in making a card stand out. The dark and eerie color scheme that helps to define Chandelure creates contrast on Chandelure VMAX. Added color also enhances Cinderace VMAX‘s triumphant pose. Orange tones may dominate the artwork, but it’s the rainbow burst behind the Pokémon that gives the impression of great energy on the brink of being unleashed. Smeargle, the Painter Pokémon, also looks right at home in the center of its vibrant rainbow vortex. Conversely, the streaks and swirls of color flowing in the water and sky around Croconaw add a soothing, ethereal vibe to the scene.

The Art of Mina Nakai 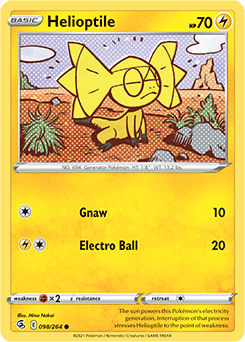 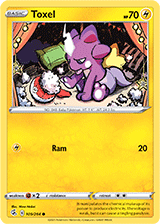 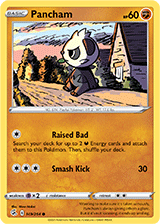 It’s hard to miss Mina Nakai’s stunning artwork when looking through your Sword & Shield—Fusion Strike collection. This artist has a distinct style that immediately draws the eye. Just look at this Helioptile card, for example. The Pokémon’s face is captured in a whimsical sketched style. That, combined with the screentone dot-covered background, lends this card a pop-art sensibility that sparks comparison to the works of Roy Lichtenstein. Judging by the lines of shock coming from Helioptile’s head (sometimes referred to as “emanata” in the comics biz), the little Pokémon is just as surprised by the playful design as we are. Nakai’s Toxel and Pancham cards aren’t nearly as experimental, but with their thick outlines, bold colors, and heavy shadows, they can’t help but stand out. 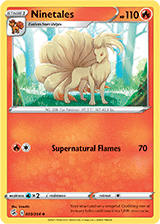 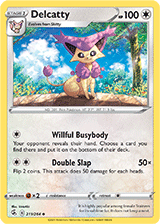 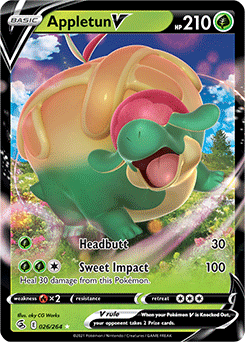 Pokémon—no surprise—are the star of the show in the Pokémon TCG. As such, it’s easy to focus all your attention on them when admiring a Pokémon TCG card. However, if you focus too hard on the cards’ subjects, you might miss the beautiful background art. The backgrounds are especially striking when they’re more realistically depicted than the Pokémon in the foreground. Check out the lavish field of flowers in the Appletun V card. The intricate detail makes an amusing contrast with the delightfully silly Pokémon. Ninetales looks especially regal illuminated by the realistic sunbeam in which it has found itself. Similarly, Delcatty sits on a sun-drenched path, its fur dappled with shadows as the light peeks through the tree cover. Those shadows give the Pokémon a depth that makes Delcatty seem to come to life. 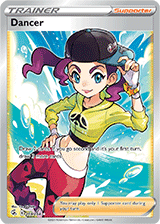 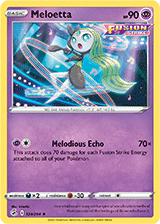 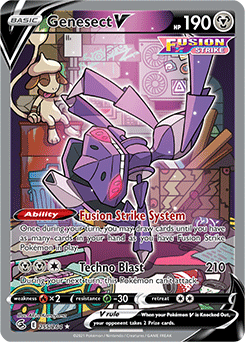 Pokémon battles are fun and all, but sometimes it’s good to take a break and cut loose. And that means only one thing—dance! Obviously, Meloetta is quick to get in on this dance party. Thanks to its graceful pose and visualized vocalization, this Pokémon looks ready to bust a move. Also, Genesect takes its breaking skills to Mythical new levels on Genesect V. It’s not just Pokémon that like to groove. As we can see on Dancer‘s standard and full-art cards, this Pokémon Trainer is poised to hit the dance floor at a moment’s notice.

A Danger to Yourself and Others 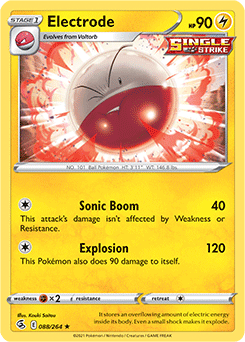 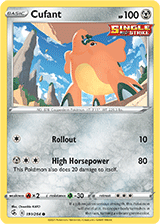 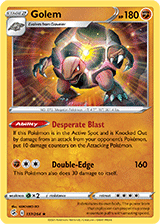 Certain Pokémon have access to attacks that inflict damage to their opponent but also have the unfortunate side effect of causing damage to the user as well. The Sword & Shield—Fusion Strike expansion features several cards that highlight these Pokémon that are willing to take one for the team in battle. Look closely at the strained expression on Electrode‘s face—it knows that its Explosion attack isn’t going to feel great. Golem seems determined as the rocky segments of its body shift to reveal a shining core within. If we were near that Pokémon, that ominous glow would be a good signal to run! Cufant may not be about to, y’know, literally explode, but that giant rock it has lifted over its head can’t be light. Don’t feel too bad, Cufant. We all take a little damage when we start lifting heavy objects.

With over 260 cards in all, there are plenty more amazing finds waiting in the Pokémon TCG: Sword & Shield—Fusion Strike expansion. Be sure to take note of the gorgeous illustrations that give the game its personality the next time you open a booster pack.