Pokémon Masters EX, the official strategy and battling Pokémon game for mobile platforms, is now available for download on the App Store (iOS) and Google Play (Android). In-game events are being hosted on a regular basis, featuring additional Pokémon and recognizable characters from across the Pokémon franchise.

Anew year is upon us, and it brings with it two new sync pairs in Pokémon Masters EX that are dazzlingly decked out. Contest Spectacular idol Lisia steps out with a new look and a new Pokémon partner: Shiny Galarian Rapidash! Dawn also returns in a festive new outfit with Sensu Style Oricorio as her partner. These two sync pairs will be around until January 17, 2023, at 9:59 p.m. PST, so don’t miss this opportunity to add them to your team. 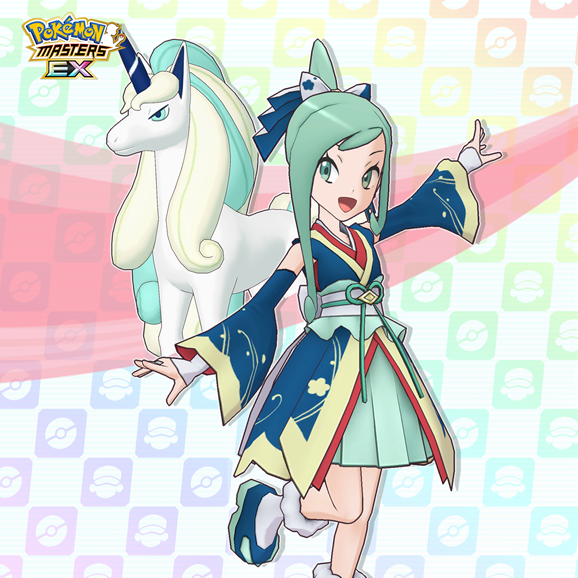 With a dazzling, dizzying flair that’s sure to impress, Lisia and her Shiny Galarian Rapidash hit the scene in style. This Fairy-type strike sync pair can greatly boost their attack power with Dire Hit + and A Battle Spectacular! Their Team Antitoxin passive skill, which prevents all allied sync pairs from getting poisoned or badly poisoned, can also prove invaluable when going up against Poison-type foes.

To get the most out of Lisia (New Year’s 2023) & Rapidash and their powerful physical move Giga Impact, it’s important to pair them with a support sync pair that can raise both their Attack and critical-hit rate. Phoebe & Dusknoir fit the bill with Dire Hit All + and Unbreakable Bonds! Both sync pairs also benefit from numerous stat bonuses thanks to their shared Hoenn theme skill. Phoebe & Dusknoir are available to scout from the general pool of 5★ sync pairs, as well as from the 5★-Guaranteed Ticket Scout and 5★-Guaranteed Hoenn Ticket Scout.

A recent update to Pokémon Masters EX made it possible to create teams featuring sync pairs that have the same Trainer. Lisia & Altaria don’t directly raise Lisia (New Year’s 2023) & Rapidash’s stats, but both sync pairs benefit from a myriad of shared theme skills, such as the Hoenn theme skill, the Artistic theme skill, and the Contest Lover theme skill. Make sure to change your battle tactics so Lisia & Altaria take center stage—and thus the brunt of the damage—while Lisia (New Year’s 2023) & Rapidash put on the real show with Giga Impact. Lisia & Altaria are available to scout from the general pool of 5★ sync pairs, as well as from the 5★-Guaranteed Ticket Scout and 5★-Guaranteed Hoenn Ticket Scout. 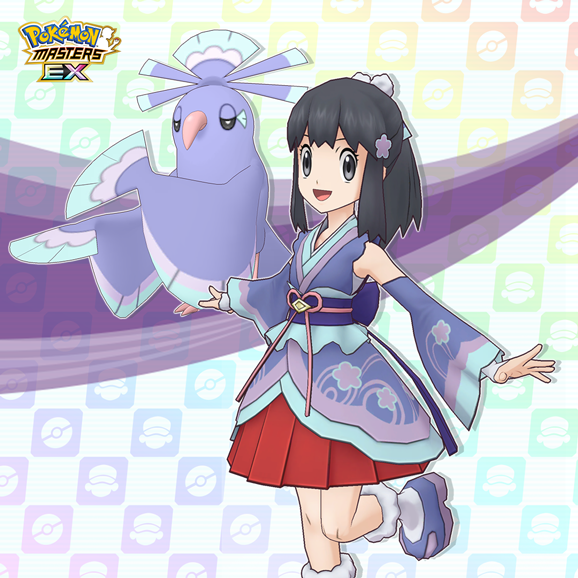 Start your new year off right by setting your opponents up for failure with Dawn (New Year’s 2023) & Oricorio. This Ghost-type tech sync pair’s rhythmic moves can put the other team at a disadvantage thanks to their Teeter Dance and Feather Dance moves, which confuse the target and lower the target’s Attack, respectively. If you have a sync pair who can boost allies’ stats, they’ll also enhance Dawn (New Year’s 2023) & Oricorio’s sync move, Elegant Celebration Ghost Beam, which grows in strength as their stats are raised.

One of Mallow & Tsareena’s strengths is their Power Posture passive skill that powers up their moves the more the target’s Attack has been lowered. Ordinarily, Mallow & Tsareena would have to use Trop Kick six times to lower their target’s Attack stat as far as it will go, but Dawn (New Year’s 2023) & Oricorio speed up the process with Feather Dance, which can combine with their passive skill Double Drop to immediately lower their target’s Attack by four stat ranks. Not only is Feather Dance great for increasing Mallow & Tsareena’s damage, but it also makes it that much easier to stand against opponents with a high Attack. Mallow & Tsareena are available to scout from the general pool of 5★ sync pairs, as well as from the 5★-Guaranteed Ticket Scout and 5★-Guaranteed Alola Ticket Scout.

It’s time to welcome an exciting new year of Pokémon Masters EX! Lisia and Dawn return with new seasonal outfits, and there’s a new sync pair you can team up with by completing a story event!

A Message from the Pokémon Masters EX Team (Vol. 42)

A Message from the Pokémon Masters EX Team (Vol. 42)

Today, we’ll focus on details about Rallies and events for the beginning of the new year.

Thanks to your support, we’re entering a new year in Pokémon Masters EX.

The entire development team is dedicated to providing you with the best experience possible, so we hope you continue to enjoy your adventures on Pasio.

Story Event Gather Up! Dream Duo! Is Under Way!

This year’s theme is “a New Year’s live show!”

To go with the event, Lisia and Dawn will appear in the Sync Pair Scout as seasonal Sync Pairs wearing their concert outfits.

Plus, Kali (Furisode Girl), a Laverre City Gym Trainer, will make her debut in this event as the apprentice of Valerie!

You can team up with Kali (Furisode Girl) & Azumarill guaranteed by completing the event, so be sure to take it on.

Their A Battle Spectacular! Move raises their Attack and Speed by four stat ranks and increases their Physical Moves ↑ Next effect by 0 to 3 ranks at random.

They also have a Passive Skill that applies the Supereffective ↑ Next effect to themselves after using their Sync Move so they can keep applying pressure after unleashing their Sync Move, making them capable of dealing major damage to opponents weak to Fairy-type attacks.

Plus, their Perfect Dance! Move applies the Stat Reduction Defense effect to the allied field of play, restores their own HP by approximately 40% of their maximum HP, and raises their evasiveness by one stat rank.

Their Elegant Celebration Ghost Beam is a Sync Move that increases in power the more their stats are raised, making them a Sync Pair that can deal major damage by making good use of their allies’ support.

Amazing Rallies for the New Year

You can get 3,000 Gems on the first day and seven New Year’s Scout Tickets on the seventh day of this Log-in Bonus, so be sure to log in every day.

One New Year’s Scout Ticket lets you use the New Year’s Poké Fair Ticket Scout one time, which offers you a chance to team up with the Fair-Exclusive Sync Pairs Sygna Suit Red, Sygna Suit Blue, and Sygna Suit Leaf.

You can get amazing rewards such as New Year’s Scout Tickets, Gems, and Battle Points by battling daily in this ongoing event.

Do your best to get all of the Tickets!

On top of that, special battles will be available for three days only starting December 31, 2022.

You can take on the battles once a day for a total of three attempts and can get a total of 3,000 Gems from them, so we hope you play them every day.

A Special Sync Pair Scout to Celebrate the New Year

Each can be used one time only. In addition to letting you team up with lots of Sync Pairs, you can also choose one Sync Pair from the ones included in each individual Sync Pair Scout.

Just like last year, a gem giveaway is now under way.

We were overwhelmed by the participation of all players during last year’s giveaway, so this year we’ve revised the number of winners and will give away a total of 200 million Gems!

You can check the results from your Present Box around January 11, 2023 to see if you’ve won. Enjoy!

A limited-time expedition area and a Location for interactions have been added to the Trainer Lodge!

Also, the Pokémon Center has received special decorations and background music to celebrate the new year.

It’s a little different from usual, so we hope you enjoy this special atmosphere in Pokémon Masters EX.

The Kalos Chapter of the Villain Arc Is Coming!

The next chapter of the Villain Arc, the Kalos Chapter, will begin on January 11, 2023!

We hope you look forward to seeing which Sync Pairs take the stage and what kind of story will unfold!

At the same time, Professor Sycamore & Xerneas will gain the ability to be raised to 6★ EX in the Battle! Friends from Kalos event.

Holo Foils for Scrapbook Photos in the Trainer Lodge will be unlocked as well, so try to raise them to 6★ EX!

The Legendary Gauntlet will begin on January 18, 2023.

The Legendary Pokémon that will be your opponents this time are Regirock, Latias, and Uxie!

Hone your skills in the Legendary Arena and train the Sync Pairs you’ll need to take these battles on!

Also, starting with this Legendary Gauntlet, you’ll be able to see in-game rankings of the top 100 longest win streaks out of all players!

There are no rewards to go with these rankings, but we hope that you’ll try to aim for the top if you think you have what it takes!

In addition to what we’ve told you about here, we also have several other events planned, including the return of a seasonal event, as well as a gear event, an Egg Event, and a mini event that highlights specific theme skills, so we hope you look forward to them.

We have a feature planned for next month’s update that lets you customize the interior of the Trainer Lodge.

More details are coming in our next message, so stay tuned.

We also have plans to revamp the interior of the Pokémon Center, as well as some of its features.

We’re hoping to make some exciting improvements, so stay on the lookout for future updates!

Our next message is scheduled for late January.
In it, we plan to share information about new Sync Pairs and events for February.