The Pokémon Company International has launched the Top Deck Academy for the Pokémon TCG. Read on below to learn more:

Get started in building your first Pokémon TCG deck today with helpful tips and insights.

There’s nothing like putting together your own Pokémon TCG deck, facing off against an opponent, and emerging victorious. But that first step can be a little challenging! The new Top Deck Academy series is here to show you how to build your own deck, as well as give you tips and strategies for the battles ahead.

This debut episode breaks down the essential elements to building a deck, from choosing the right Pokémon, building a search engine, and how to prepare for your opponent. Follow along as Pokémon TCG expert Ellis Longhurst builds a sample deck from scratch and provides tips on how to make your own deck a success. You can also read the transcript here to revisit certain key points and get a closer look at the cards mentioned in the episode.

A new episode comes out every week, and you can watch the entire series here on Pokemon.com or on YouTube and Twitch.

Put on your thinking caps—it’s time to learn with Top Deck Academy!

Ever wanted to build a Pokémon TCG deck, but didn’t know where to start? We’ve got you covered, Trainers. 😉 Tune in every Thursday for new episodes to help you beef up your Pokémon TCG game!

All right, in this episode of Top Deck Academy, I’m going to share with you five steps that you can follow to turn your favorite Pokémon into the hero of a Pokémon TCG deck.

In Step 1, we’re going to choose the hero of our deck. In Step 2, we’ll identify the core components that make up a great deck. Step 3 is all about covering our weaknesses. And in Step 4, I’ll show you how to create a successful draw engine. My personal favorite, Step 5—we’ll name the deck!

All right, are you ready? Let’s dive in! 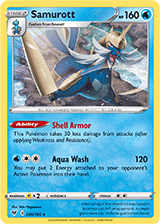 The first step when building a Pokémon Trading Card Game deck is to choose a Pokémon around which your strategy will be focused. This is usually a Pokémon with a powerful attack or Ability. I have chosen Samurott from the new Sword & Shield—Vivid Voltage expansion. This card may seem quite familiar! It’s one of the key Pokémon from the new Drednaw theme deck.

My strategy will be to use Samurott to deal loads of damage to my opponent’s Pokémon. So it’s pretty important that I’m able to find this card in my deck when I need to, so I am going to include four copies of this card. With the exception of Basic Energy, players can only include up to four copies of the card in their deck. Having four copies of Samurott means that I’ll be able to find this card when I need it in battle. If I only had one copy, I might not be able to draw it or find it in my deck when I really need it!

So now we’ve identified the hero of our deck. Let’s move on to Step 2 where we will talk about the core components of the deck.

The second step when building a Pokémon Trading Card Game deck is to identify the core components of the deck. So we ask ourselves: which cards are absolutely essential to include? 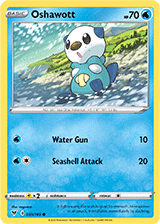 Now we’ve assured that we can get Samurott into play, but we also need to ensure that we can actually attack with it. So if we have a look at Samurott, Aqua Wash is an attack that requires Water Energy. So of course, we need to include Water Energy cards in the deck. Instead of including only three Energy cards, I have chosen to include 10. And this is because I am probably going to set up more than one Samurott during the game, and I also want to be able to draw and attach an Energy card every turn.

Let’s have a think about what are some of the core components of a deck you might be building to make a hero out of your favorite Pokémon. Some Pokémon might require a Pokémon Tool card in order to best execute that strategy, or a Supporter card, or perhaps more than one Energy type.

Now that we’ve identified the hero of the deck, and some of the core components, let’s talk about some of the ways we can identify—and mitigate—our weaknesses.

The third step of the deckbuilding process is to identify and mitigate any potential weaknesses. One of the inherent weaknesses of a Stage 2 deck, like the Samurott deck we’re building, is that it can often be quite slow to get a Stage 2 Pokémon into play. Remember, one of the rules of the Pokémon Trading Card Game is that you cannot evolve a Pokémon on the turn that you played it or evolve it more than once per turn. This means that it will take three turns to get a Samurott into play—one turn to play Oshawott, a second turn to play Dewott, and a third turn to evolve into Samurott.

The best way to speed up this process is by using the Rare Candy Item card. This Item card allows you to evolve Oshawott straight into Samurott, bypassing Dewott. It’s a pretty powerful card, so I am going to include four of those in my deck and reduce the copies of Dewott from four to two.

Now let’s think about other potential weaknesses of this deck. One revolves around a rule that restricts Energy attachments per turn. In the Pokémon Trading Card Game, players can attach only one Energy card to one of their Pokémon every turn. So that means even if we can evolve an Oshawott into a Samurott in two turns, because Aqua Wash requires three Energy, it’s going to take three turns to power up Aqua Wash. 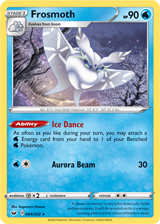 For this reason, I’ve chosen to include Frosmoth and Snom in my deck. Frosmoth’s Ice Dance Ability enables players to attach as many Water Energy cards to their Pokémon as they like every turn—as long as that Pokémon is on the Bench. That means that with Frosmoth and Rare Candy, we can evolve an Oshawott into a Samurott and attach three Energy cards in one turn!

That’s a pretty powerful combination. But we also have to think, what if we aren’t able to find the exact cards to get that Samurott into play? Maybe we should start thinking about some alternative attackers that we can include in the deck. Let’s think about it. The best kind of Pokémon to include would maybe be a Basic Pokémon because it only requires one turn to set up. And of course, we’re going to want a Pokémon that attacks using Water Energy cards because we already include Water Energy cards in our deck. There are lots of choices; we could pick Lapras V, Blastoise & Piplup-GX, and Eiscue V, just as some examples. However I’m going to choose Keldeo-GX. This Pokémon can do loads of damage for an attack cost of only three Energy cards. And it has an Ability that blocks Pokémon-GX from attacking, which gives me time to set up my Samurott on the Bench.

All right, we’ve talked about the hero of the deck. We’ve also talked about some core components, and now we’ve also discussed some ways to mitigate our weaknesses. Let’s talk about now the draw engine of the deck—ways to draw cards and to search for specific cards.

Every Pokémon Trading Card Game deck should have a way to search the deck and the discard pile for their core components. In competitive play, you’ll often hear this be called a “draw engine.” And almost half of every Pokémon TCG deck is dedicated to the draw engine. 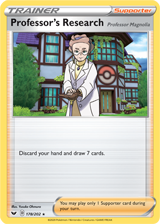 Let’s consider Samurott. To pull off the combo that we described earlier—that’s evolving Oshawott into a Samurott using Rare Candy, and using Frosmoth’s Ice Dance Ability to put loads of Energy cards onto that Samurott—we’re going to need to draw a lot of cards. The best way to do that is to include Supporter cards in the deck, like Professor’s Research and Marnie.

Sometimes you draw loads of cards but still miss out on the one you really wanted! Perhaps that Samurott or the final Water Energy you needed to be able to use that Aqua Wash attack. So it’s really important that we also include cards that specifically allow us to search the deck for those core components. In the Samurott deck, I would include cards like Quick Ball, Great Ball, or Pokémon Communication to find the right Pokémon to pull off that combination; or an Item card like Capacious Bucket that allows us to search the deck and find Water Energy cards and put them straight into our hand.

And there’s one other pretty important card I’d like to include, and that’s a new Supporter card from the Sword & Shield—Vivid Voltage expansion: Nessa. Nessa allows us to draw four in any combination of Water-type Pokémon and Water Energy cards from the discard pile. That’s pretty powerful. It’s the kind of card I’d love to have towards maybe the end of the game when maybe there are lots of Water Energy cards or a Keldeo-GX or a Samurott in the discard pile. But perhaps it’s not quite as useful at the beginning of the game when we’re trying to set up all our integral pieces, so I would only include one of those in the deck.

All right, now we’ve discussed the hero of the deck, the core components of the deck, how to identify and mitigate our weaknesses, and we’ve also discussed the draw engine of the deck. Now we’re going to talk about probably the most fun part: naming your deck!

All right, we’ve done it! We’ve built a Pokémon Trading Card Game deck from scratch! The final step is to name your deck. Most Pokémon Trading Card Game decks are named after the two Pokémon that are at the core of its strategy. So in this case, the deck would probably be called Samurott and Frosmoth. However, you can be as creative as you like when you’re naming your deck!

Let me know what you thought on the Samurott and Frosmoth deck that we just built, and also which decks you’d like to see in the future. And make sure you stay tuned for the next episode of Top Deck Academy, where we’re going to dive deeper into deckbuilding with the Sword & Shield—Vivid Voltage expansion.

For some extra credit, here’s the full decklist for this Samurott and Frosmoth deck: 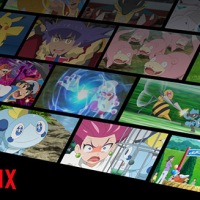 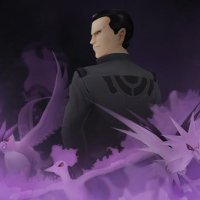