Take lessons from this deep look at a deck built around a powerful Pokémon from the Sword & Shield—Vivid Voltage expansion.

One of the best ways to better understand the Pokémon Trading Card Game is to deconstruct good decks to see what makes them tick. In this second episode of Top Deck Academy, you’ll learn how to build an effective deck around a powerful Pokémon VMAX. You can read the transcript here as you watch to revisit certain key points and get a closer look at the cards mentioned in the episode.

You’ve built a deck, so now it’s time to learn how to use your cards together!

Join host Ellis Longhurst as she outlines the basics of searching for new card combinations in the Pokémon TCG using Coalossal VMAX, Galarian Sirfetch’d, and Bea!

Hey, Trainers! Welcome to Top Deck Academy. I’m Ellis Longhurst, the Pokémon Trading Card Game player and caster. Like many Pokémon TCG Trainers, I love to explore new card combinations to try to unlock winning strategies. And there’s no better place to look for these new card combinations than the newest Pokémon Trading Card Game expansion, Sword & Shield—Vivid Voltage. This set has over 200 new cards that players can use to enhance their existing decks or build a new deck from scratch.

Now, if you’re brand new to the Pokémon TCG or still learning the game, I’d highly recommend you jump over to tcg.pokemon.com/how-to-play to start your Pokémon journey with our how-to-play videos. 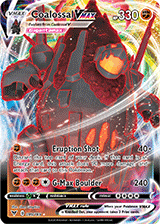 All right, in this episode of Top Deck Academy, I’m going to take a look at one of the powerful new Pokémon from the Sword & Shield—Vivid Voltage expansion: Coalossal VMAX. And we’re also going to have a look at the plethora of new Trainer cards, Energy cards, and Pokémon that can be used to enable Coalossal VMAX to shine.

All right, you ready to go? Let’s rock.

Sword & Shield—Vivid Voltage brings a bunch of cool new Pokémon to the Pokémon TCG, but Coalossal VMAX stands out from the crowd for a number of reasons. This Pokémon is colossal both in name and in nature. It has a huge number of Hit Points, and its G-Max Boulder attack really packs a punch. Coalossal VMAX is a Fighting-type Pokémon, which means it does extra damage to Pokémon like Eternatus VMAX and Boltund V, which both have a weakness to Fighting. These Pokémon are both very popular in competitive play, and Coalossal VMAX can knock them out in one hit. All right, let’s now take a look at ways that we can power up Coalossal VMAX.

Coalossal VMAX can do loads of damage to the opponent’s Pokémon with its G-Max Boulder attack, but look at the Attack Cost: four Energy. Remember, one of the rules of the Pokémon Trading Card Game is that players can only attach one Energy card to their Pokémon per turn. Coalossal VMAX could be knocked out before it even gets to use its G-Max Boulder attack. Fortunately, Trainer cards like the new Supporter card Bea enable players to attach more than one Energy card to their Pokémon per turn. 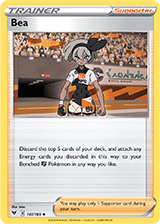 In competitive play, attaching more than one Energy card is called “accelerating Energy.” Bea is a pretty exciting card which reads, “Discard the top 5 cards of your deck and attach as many Energy as you find there to your Benched Fighting Pokémon.” If you’re worried about discarding too many of your key resources using Bea, Coalossal VMAX offers a more controlled approach to accelerating Energy. Its Eruption Shot attack deals 40 damage to the opponent’s Active Pokémon and discards the top card of the deck. If that card is an Energy card, Eruption Shot does 90 more damage, and you can attach that Energy to Coalossal VMAX.

Now, some of the popular ways to ensure that an Energy card is on the top of the deck include using Oranguru‘s Primate Wisdom Ability to exchange the top card of the deck with a card in your hand, playing Rotom Phone to search the top five cards of the deck and put one on top, and using Jirachi‘s Dreamy Revelation Ability to look at the top two cards of the deck, put one in your hand, and put one back on top. Now, Jirachi is one of the new amazing Pokémon from the Sword & Shield—Vivid Voltage expansion. It is a great way to draw an extra card every turn, so I wouldn’t be surprised to see it popping up in a variety of decks.

All right, let’s have a look at some ways that we can increase the damage that Coalossal VMAX does to the opponent’s Active Pokémon.

Let’s now consider ways that we can reduce the damage that Coalossal VMAX takes from the opponent’s Pokémon’s attacks. 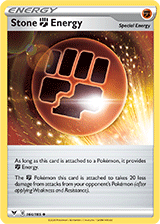 It’s important to make sure that Coalossal VMAX can do loads of damage to the opponent’s Active Pokémon, but it’s just as important to make sure that it can stay in the battlefield for as long as possible. Fortunately, Sword & Shield—Vivid Voltage includes a Special Energy called Stone Fighting Energy that reduces the damage from attacks by opponent’s Pokémon by 20, but the effect can only be used by Fighting-type Pokémon. Imagine how difficult it would be to knock out a Coalossal VMAX if it had four of these Stone Fighting Energy attached. Let’s take a look at some of the other Fighting-type Pokémon from Sword & Shield—Vivid Voltage that can use Stone Fighting Energy to its full effect.

Coalossal VMAX is not the only Fighting-type Pokémon introduced to the game by Sword & Shield—Vivid Voltage. The set also introduces Galarian Sirfetch’d V, which is a powerful attacker and the perfect partner for Coalossal VMAX. Its Meteor Smash attack deals 200 damage to the opponent’s Active Pokémon for a cost of only three Energy, and it can be powered up in a pinch by its Resolute Spear Ability, which enables players to move as many Fighting Energy on the board onto Galarian Sirfetch’d V when it moves into the Active Spot. 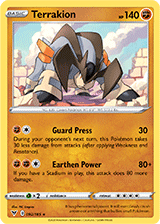 Thanks for watching this episode of Top Deck Academy. Have you built a Coalossal VMAX deck? Which cards did you include, and what are your tips for battle? All right, thanks, Trainers. Until next time!