Read on below to learn more about a new Pokémon TCG product:

The latest Pokémon Trading Card Game expansion, Sword & Shield—Lost Origin, arrives on September 9, 2022, but you can visit your local hobby store to start playing with it early! Starting August 26, 2022, select retailers will begin selling the Sword & Shield—Lost Origin Build & Battle Box, giving fans a chance to have a Prerelease battle and experience the latest expansion before its official release date.

The Prerelease format allows players to compete with a 40-card deck, with four Prize cards set aside at the start of play, as opposed to a 60-card deck with six Prize cards. The format is perfect not only for introducing new players to the exciting world of the Pokémon Trading Card Game with quick, fun games, but also for giving seasoned players a window into all that Lost Origin has to offer.

Each Build & Battle Box includes a 40-card ready-to-play deck featuring key cards from current and prior sets as well as one of four unique foil promo cards to boost your deck. Depending on which promo card you get, you could add the always-spooky Gengar, musclebound Machamp, fantastic-finned Finneon, or flower-picking Comfey to your deck and collection. 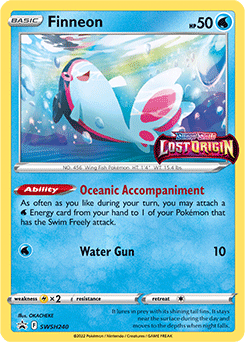 If you find this promo in your Build & Battle Box, you may also want to find a stream of Pokémon with the Swim Freely attack. Ordinarily, you can only attach 1 Energy card per turn, but Finneon’s Oceanic Accompaniment Ability allows you to attach as many Water Energy cards as you like during your turn from your hand to 1 of your Pokémon that has the Swim Freely attack. If you’re able to get Dewgong into play, you’ll be able to hose down your opponents with the powerful Floe Return attack that shuffles any amount of Water Energy from your Pokémon into your deck, doing 40 damage for each card shuffled into your deck in this way. 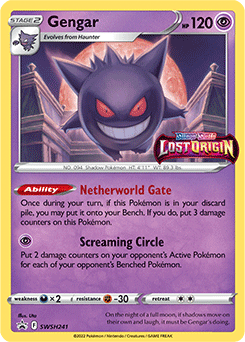 Gengar is as sneaky as Pokémon come, and its Netherworld Gate Ability can get it into action in the blink of an eye. Once during your turn, if this Pokémon is in your discard pile, you may put it onto your Bench. If you do, put 3 damage counters on Gengar. Most Stage 2 Pokémon need to evolve a couple of times before coming into play, but Gengar isn’t hampered in this fashion, even being able to return itself to play after being Knocked Out! Aside from its Ability, Gengar’s Screaming Circle attack can be useful and delivers significant damage at a cost of only 1 Energy. 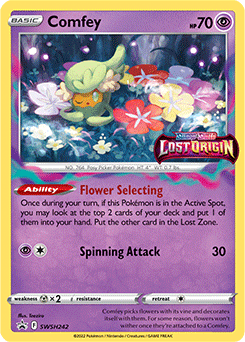 Comfey loves to pick flowers as the Posy Picker Pokémon, and it also loves to pick cards off the top of your deck with its Flower Selecting Ability. Once during your turn, if this Pokémon is in the Active Spot, you may look at the top 2 cards of your deck and put 1 of them into your hand and 1 in the Lost Zone. Comfey doesn’t deliver devastating top-tier attacks, but it does help you find the cards you need when it matters most—making it a strong card in a Prerelease format that often has fewer Supporter and Item cards available. Be careful, though; you don’t want to send too many cards to the Lost Zone without a clear path to winning the game before you run out of cards. 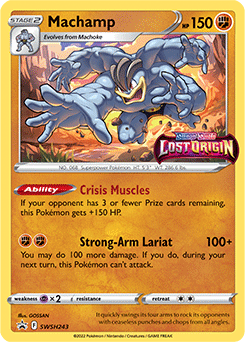 The Superpower Pokémon, Machamp, brings some serious extra bulk with its Crisis Muscles Ability! Machamp leverages your opponent’s Prize count by gaining 150 HP when they have 3 or fewer Prize cards remaining. Since the Prerelease format uses only 4 Prize cards, this Ability can activate very quickly! As a Stage 2 Pokémon, Machamp takes some time to get up and running, but it will reward you with spectacular results from its adrenaline-fueled muscles.

There’s variation between Build & Battle Boxes, so you can add your own creative twist. Whether you’re heading to a hobby store or playing with a friend, have some quick and fun battles using cards from the new Sword & Shield—Lost Origin expansion!

My Tweets
Advertisements
Pokémon Scarlet and VioletNovember 18, 2022
54 days to go.