The Pokémon Company is celebrating the upcoming harvest moon by featuring Clefairy in various ways. Read on below to learn more:

Celebrate the Harvest Moon with Clefairy on Pokémon TV

You’ll be over the moon when you watch this collection of Pokémon the Series episodes featuring the loveable Fairy Pokémon.

As the harvest moon rises in the night sky on the northern hemisphere, it’s the perfect time to commemorate Clefairy—as well as Clefable and Cleffa—with a special channel on Pokémon TV. After all, Clefairy has been closely associated with the moon since Pokémon’s earliest days. In these classic Pokémon the Series episodes, you’ll see Ash, Pikachu, and their friends have multiple encounters with these charming Pokémon for some adventures that are out-of-this-world.

You can tune in to Pokémon TV for the next two weeks to moon over Clefairy on watch.pokemon.com or using the Pokémon TV mobile app. And remember, the Pokémon TV app is now available for Nintendo Switch as well.

Celebrate the Moon Festival with a Clefairy TCG Retrospective

Learn more about some of the most iconic Clefairy cards printed over the Pokémon’s 26-year history.

Clefairy has been a part of the world of Pokémon since the very beginning. The Fairy Pokémon debuted alongside 149 other Pokémon in 1996 in Pokémon Red and Pokémon Green—the first Pokémon video games released in Japan. In 1999, Clefairy appeared in its first card in the first Pokémon TCG set, Base Set. Clefairy, alongside its pre-evolved form Cleffa and its evolved form Clefable, has continued to be a loveable staple of the Pokémon TCG ever since. Celebrate the Moon Festival with this Pokémon that’s closely related to the cosmos, and read on to learn more about the history of Clefairy in the Pokémon TCG!

Cleffa, Clefable, and Clefairy Throughout the Years 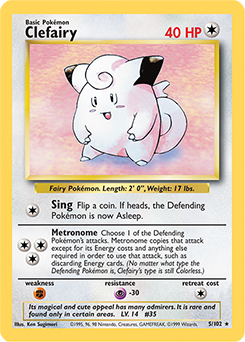 This classic Clefairy illustrated by Ken Sugimori is the predecessor to all Clefairy cards. Metronome was the first attack printed that allowed a Pokémon to copy another Pokémon’s attack without meeting any special requirements, making this card exceptionally unique. 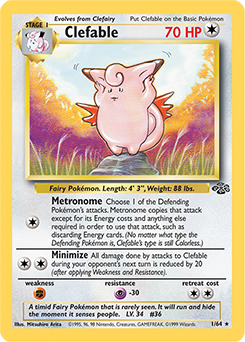 This classic Clefable, illustrated by Mitsuhiro Arita, was not only the first Clefable card printed, but also the first card printed in the Jungle expansion. Like Clefairy, it has the powerful Metronome attack, but it was significantly easier to use because it only cost 1 Energy. 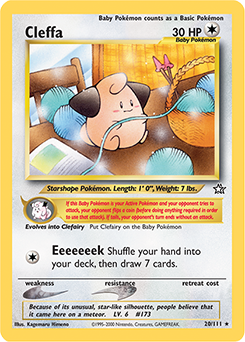 This classic Cleffa illustrated by Kagemaru Himeno plays with yarn on a table, emphasizing its small size as one of the first Baby Pokémon. Not only was this the first Cleffa card ever printed, but it was also arguably the toughest Cleffa card thanks to its “Baby Rule” that made it extremely difficult to Knock Out. Its Eeeeeeek attack was also a great way to refresh the hand for just 1 Energy. 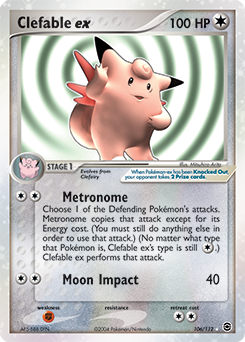 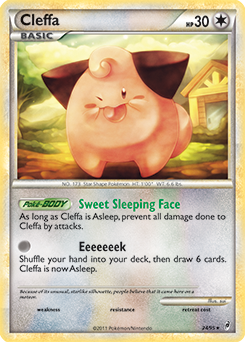 Featuring a playful illustration of Cleffa in the Ilex Forest by sui, this card was originally printed in the HeartGold & SoulSilver expansion and then reprinted in Call of Legends. Similar to the Cleffa shown above, this Cleffa was well known for being difficult to Knock Out while in the Active Spot thanks to its Sweet Sleeping Face Poké-Body. Its Eeeeeeek attack only drew 6 cards (compared to Cleffa’s 7) but it was still effective. 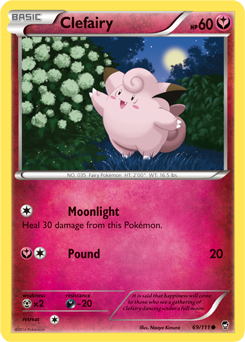 This Clefairy with the moon in the background (illustrated by Naoyo Kimura) was the first Fairy-type Clefairy card to be printed in the Pokémon TCG. Previously, starting with Base Set, it appeared as a Colorless-type Pokémon. Thanks to its new typing, this was also the first Clefairy that could hit an opposing Pokémon for Weakness—the new Dragon-type Pokémon cards were weak to the newly introduced Fairy-type cards. Many more Fairy-type Clefairy cards followed during the XY and Sun & Moon Series. 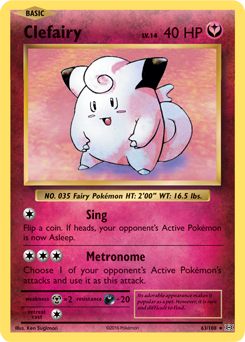 The XY—Evolutions expansion celebrated the original Base Set, as seen in this classic Clefairy illustrated by Ken Sugimori. Unlike the original Clefairy card, this Clefairy was a Fairy type and featured a new Weakness and Resistance. While it may not seem threatening on the surface, its Metronome attack and its Fairy typing made it a potent card in the Expanded format. Ninja Boy was often used to swap Pokémon with Energy acceleration (like Ho-Oh-EX) with Clefairy to instantly bring out a big Metronome capable of taking out powerful Dragon-type attackers like Arceus & Dialga & Palkia-GX. 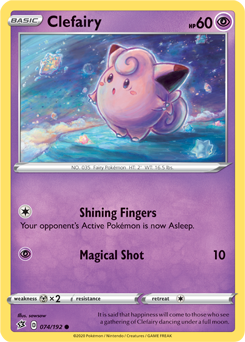 At the beginning of the Sword & Shield Series, Fairy-type Pokémon and support for them were discontinued. Many Pokémon who were Fairy types in the video games began to be represented as Psychic types in the Pokémon TCG. This almost-cosmic Clefairy illustrated by sowsow was the first Psychic-type Clefairy to be printed, marking the Pokémon’s third typing in the game.

Almost Clefairy, but not quite 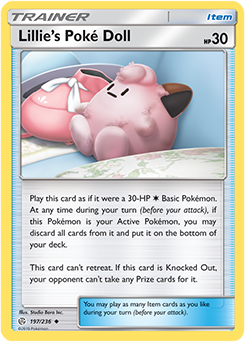 Lillie’s Poke Doll isn’t quite a Clefairy card, but it does feature artwork of a Clefairy Doll next to Lillie’s hat and bag! The illustration also resembles the original Clefairy Doll. What makes this card unique is how prominent it was as a competitive card throughout the Sun & Moon era. Lillie’s Poke Doll was often paired with Munchlax and Florges, both of which could continually return it from the discard pile to the top of the deck, allowing the Trainer to stall the game until their opponent ran out of cards in their own deck.

Celebrate the Harvest Moon with Clefairy in Pokémon GO and More

The moon-loving Pokémon shines this week with a Pokémon GO event, a PTV collection, and a Pokémon TCG retrospective.

Look to the night sky on September 10, 2022, and it’s likely you’ll spot the moon looking full and bright. Known as a harvest moon, this astronomical occurrence is the perfect time to celebrate Clefairy, a Pokémon that’s always had a strong connection to the moon. After all, Clefairy are known to emerge from their mountain homes during the full moon to dance and play. They can also store moonlight in the wings on their backs, which seems to give them the ability to float in midair. This year, there are a few ways to appreciate the adorable Fairy Pokémon.

One is by playing Pokémon GO during the Clefairy Commotion event on September 10, 2022, from 6:00 p.m. to 9:00 p.m. local time. Clefairy will appear more frequently in the wild, and lucky Trainers might even encounter a Shiny Clefairy!

So, spend some time appreciating Clefairy this week, and when you go outside to see the harvest moon for yourself, why not do a little dance in its glow? After all, that’s what Clefairy would do.

Clefairy Fact: This moon-loving Pokémon received its first card in the original #PokemonTCG Base Set expansion! 🌕

Celebrate the Harvest Moon with a special retrospective, showcasing Clefairy and its Evolution chain over the years!https://t.co/rspHHv6F4L pic.twitter.com/ZGGJRporlE

Clefairy Fact: its adorable behavior and cry make it highly popular. However, this cute Pokémon is rarely found. 😮 pic.twitter.com/kTzoMVyJcU

All this week, we’re highlighting the moon-loving Pokémon. Discover all the ways you can appreciate Clefairy as they emerge under the moonlit sky to dance and play!