Get an early look at some of the beautiful new cards that can be found in the upcoming expansion.

The upcoming Pokémon Trading Card Game expansion, Crown Zenith, arrives on January 20, 2023. Among its 160+ new cards, you’ll find brand-new Radiant Pokémon, incredible Pokémon V, Pokémon VSTAR, and Pokémon VMAX, and the return of some popular cards from previous expansions with stunning new artwork. The expansion also contains a 70-card subset called the Galarian Gallery, which features dazzling illustrations. Before the expansion arrives, we wanted to preview some of the cards you’ll be able to find within. Check out these beauties.

Mewtwo VSTAR starts things off with this action-packed card. Of course, when you’re witnessing a fierce battle between this Legendary Pokémon and a mighty Charizard, would you expect anything less than rampant destruction amidst swirling energy and flame? Fittingly, Mewtwo VSTAR is also equipped with some potent attacks. Its Psy Purge attack allows you to discard up to 3 Psychic Energy from among your Pokémon and does 90 damage for each card you discard. If your opponent has a lot of Pokémon V in play, you might want to unleash the Star Raid VSTAR Power, which does 120 damage to each one. They’ll certainly feel that attack! 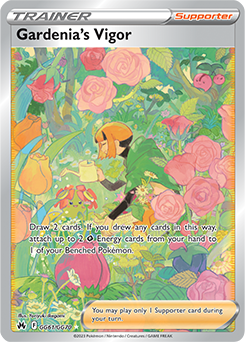 Shifting from a chaotic battle to a serene botanical oasis, we have Gardenia’s Vigor. The Eterna City Gym Leader—watering can in hand—can be found alongside her Bellossom, Cherubi, and Cherrim friends amid a sea of flowers. Playing this Supporter card allows you to draw two cards. When you do, you can also attach up to 2 Grass Energy cards from your hand to 1 of your Benched Pokémon. It would appear that Gardenia can help her friends get charged up for battle!

This Thievul card can’t help but stand out thanks to its striking color scheme: bright white highlights, inky black shadows, and a shock of red and orange. It has a noir vibe that certainly fits the Fox Pokémon’s style. Thievul’s Sharp Fang attack does a solid 110 damage, and its Baffling Ability could prove very useful if your opponent goes after your Benched Pokémon—if your opponent has two or fewer Prize cards remaining, this Ability protects your Benched Pokémon V from all effects of that opponent’s Supporter cards. 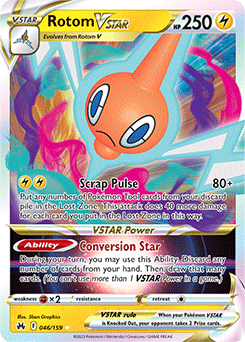 For a Pokémon that appears to be rushing into action, Rotom VSTAR is looking awfully concerned. The poor thing really has no reason to worry, though. With a respectable 250 HP, it’s tough, and its Scrap Pulse attack, which does 80 damage plus an additional 40 damage for every Pokémon Tool card you move from your discard pile into the Lost Zone, can cause a lot of trouble for your opponent with the proper setup. Rotom VSTAR even has a VSTAR Power that could prove useful if you need to refresh your hand: the Conversion Star Ability lets you discard any number of cards from your hand and draw an equal number. Cheer up, Rotom—we appreciate you! 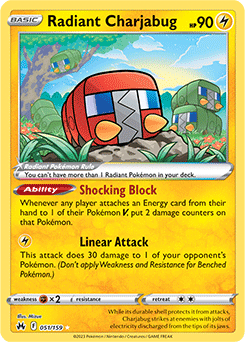 Looking positively stylish in red, this Radiant Charjabug certainly stands out among its green peers. This little Pokémon is already ready to spread chaos by handing out small amounts of damage in unexpected ways. Its Linear Attack does 30 damage to any of your opponent’s Pokémon, whether it’s their Active Pokémon or one on their Bench. Not only that, but its Shocking Block Ability requires every player to put 2 damage counters on their Pokémon V whenever they attach an Energy card from their hand to that Pokémon.

You’ll find these and many more cards when the Pokémon TCG: Crown Zenith expansion releases on January 20, 2023.