From VSTAR Powers to autographed cards, get a sneak peek at what’s coming in the newest expansion.

Reaching the pinnacle of Pokémon TCG gameplay isn’t easy, but the Pokémon TCG: Crown Zenith expansion is here to help players along their journey. The latest and final expansion of the Sword & Shield Series boasts incredibly powerful Pokémon V and Pokémon VMAX, a gorgeous Galarian Gallery that will give past Trainer Galleries a run for their money, and fun Abilities that offer a strategic edge. Here are some of the cards you’ll find in the Pokémon TCG: Crown Zenith expansion, which is officially available January 20, 2023. 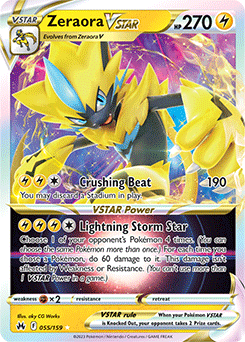 Players looking for an electrifying Pokémon VSTAR to help crush opponents have found a useful ally in Zeraora VSTAR. Not only is it capable of taking an impressive amount of damage with 270 HP, but it’s more than capable of doing substantial damage as well. Its Crushing Beat attack delivers 190 damage—enough to crush all but the most powerful opponents—and gives the option of discarding a Stadium in play. But the real star is the Thunderclap Pokémon’s VSTAR Power, appropriately named Lightning Storm Star. In this particular storm, lightning strikes not once, not twice, but four times. And best of all, players get to choose which of their opponent’s Pokémon get hit. Choose an opponent’s Pokémon four times—with the option of selecting the same Pokémon multiple times—and do 60 damage with each bolt. And while you can’t use more than 1 VSTAR Power in a game, it’s certainly worth it to unleash a lightning storm of epic proportions. 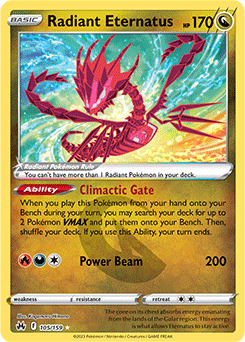 One of the greatest challenges of any Pokémon TCG battle is getting the cards you need out of your deck and into your hands. This is where Radiant Eternatus comes to the rescue. Due to the Radiant Pokémon rule, players can have only 1 Radiant Pokémon in their deck at a time. But Radiant Eternatus’s Climactic Gate Ability certainly makes this a Radiant Pokémon worth having. When you play Radiant Eternatus from your hand onto your Bench during your turn, you can search your deck for up to 2 Pokémon VMAX and put them onto your Bench. While this Ability ends your turn, it certainly gets a lot done. This allows players to bypass their more vulnerable Pokémon V and head straight for the Pokémon VMAX that can take—and dish out—greater damage. It’s also worth noting that this Radiant Pokémon has an attack called Power Beam that does 200 damage, more than enough to Knock Out most Pokémon. 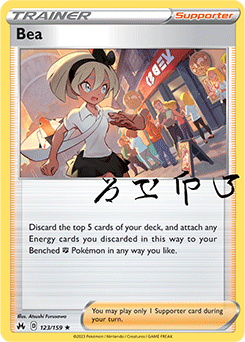 Anyone who has ever wanted an autograph from a popular Pokémon Gym Leader is in luck. Galar’s famously intense Fighting-type Gym Leader Bea makes an appearance as a Trainer card that also happens to boast her autograph. Considering this Gym Leader is known for being highly energetic and focused on battle, it’s no surprise that Bea’s Supporter card allows players to discard the top 5 cards of their deck and attach any Energy cards that were discarded to their Benched Fighting-type Pokémon in any way they like. Bea’s always bringing the energy, and the Pokémon TCG: Crown Zenith expansion is no exception. 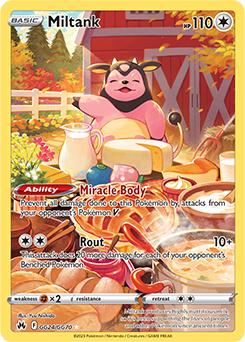 Miltank is part of the Pokémon TCG: Crown Zenith expansion’s Galarian Gallery, featuring artwork that tells a story. In Miltank’s case, the art by Yuu Nishida showcases the Milk Cow Pokémon presiding over a wholesome farm feast that will leave your mouth watering. Despite being a Basic Pokémon, Miltank has some tricks up its sleeve. For one thing, its Miracle Body Ability prevents Pokémon V from doing any damage to it with their attacks. Be sure to use this Pokémon’s attack, Rout, when your opponent has a Bench full of Pokémon—it does 10 damage to start with, plus 20 more for each Pokémon on your opponent’s Bench. This card is so powerful that Piper Lepine used it as part of her winning Mewtwo V-UNION deck at the 2022 Toronto Regional Championships. 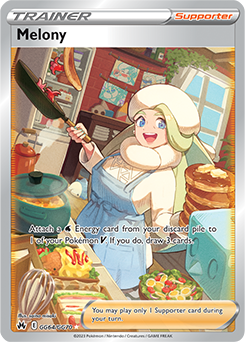 Galar’s Circhester Gym Leader may be as cold as ice, but her Supporter card brings some much-needed Energy to your gameplay. It’s part of the Pokémon TCG: Crown Zenith expansion’s Galarian Gallery, and the artwork by saino misaki is especially endearing. The illustration captures Melony whipping up a feast of pancakes, salad, soup, and other dishes as her Eiscue oversees the food preparation. Just as a hearty meal delivers energy, this Supporter card allows the player to attach a Water Energy card from their discard pile to 1 of their Pokémon V and then draw 3 cards.

These are just a few of the incredible cards you’ll find in Pokémon TCG: Crown Zenith. See what other cool cards you can discover when the expansion releases on January 20, 2023. 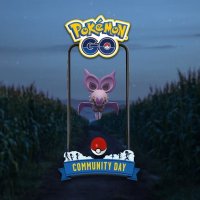 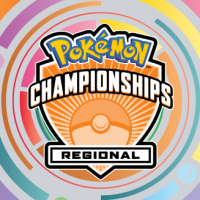