Watch Ash’s Greatest(?) Triumphs in Pokémon the Series on Pokémon TV. To celebrate Ash’s dedication to becoming a Pokémon Master, we’ve assembled a special channel with some of his astounding victories.

A couple months ago, we discussed some of the many failures of Ash Ketchum, the beloved hero of the long-running Pokémon the Series. We were having a bit of cheeky fun, but admittedly, that article doesn’t tell the full story of our hero’s incredible journey through the world of Pokémon. After all, Ash is a devoted Pokémon Trainer whose skills have grown considerably since he first left his home in Pallet Town.

This is the perfect time to reflect on Ash’s talents, too. After all, he just competed in the very first Alola Pokémon League in Pokémon the Series: Sun & Moon—Ultra Legends on Disney XD. So why not look back on some of the many victories that got him to that point? 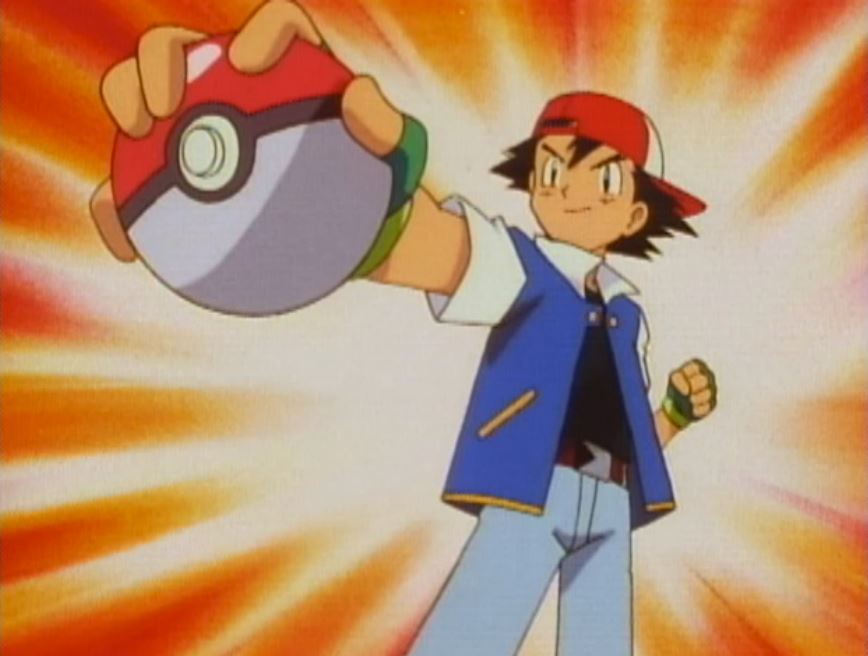 One of Ash’s earliest triumphs occurs in the third episode of Pokémon the Series when he catches a Pokémon for the very first time (“Ash Catches a Pokémon”)! While traveling with Misty through the Viridian Forest, Ash stumbles across a wild Caterpie. Confident in his abilities, he doesn’t even send Pikachu in to weaken the small Bug-type Pokémon. Instead, he lobs a Poké Ball at Caterpie, and through sheer luck (or is that grit?), he catches it! It isn’t long before Caterpie evolves into Metapod and then Butterfree. But soon, Ash’s Butterfree makes a connection with a pretty pink Butterfree, and after a tearful farewell on both sides, Ash watches the first Pokémon he ever caught fly off to a better life. Great work, Ash! 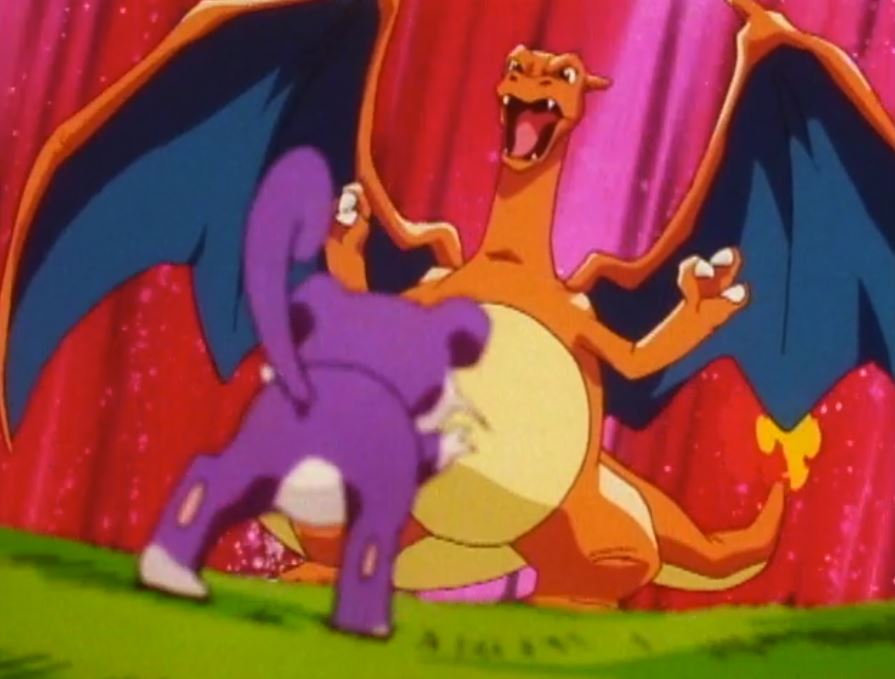 Near New Bark Town, Ash, Misty, and Brock meet a rookie Pokémon Trainer named Casey (“The Double Trouble Header”). When Ash insults Casey’s favorite sports team, she challenges our boy to a Pokémon battle. Casey has just started her Pokémon journey, and her team of Pidgey, Rattata, and Chikorita aren’t particularly strong. Despite Brock’s advice of “don’t be too tough on her,” Ash sends his Charizard into the fray. Ash can’t stop making snarky quips as Charizard defeats Casey’s team without breaking a sweat. After her crushing defeat, Casey runs off into the woods, crying as Ash continues to boast about his incredible skills. Poor Casey runs into Team Rocket, who convince her to join forces with them to get even with our arrogant hero. Well done, Ash! 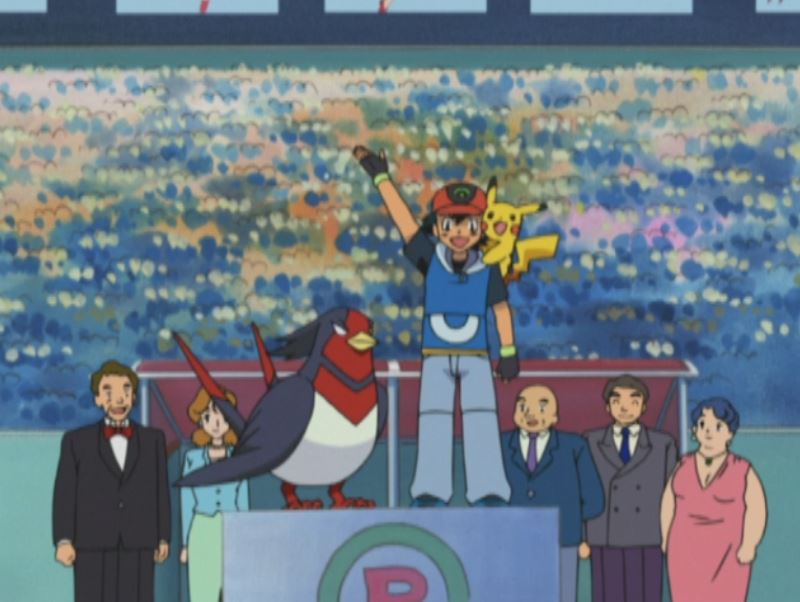 Just outside Crossgate Town, a chance encounter with a Trainer named Shane introduces Ash and his friends to PokéRinger competitions. In PokéRinger, Trainers send their flying Pokémon to battle in midair in a race to capture a ring and hang it on a goalpost. Intrigued by the concept, Ash decides to enter the competition with his Taillow (“That’s Just Swellow”). Despite having just learned about the game, the pair prove to be quite skilled and quickly move to the finals. Their opponent is Team Rocket’s James, who—as fate would have it—was trained in the game by a PokéRinger champion during his youth. Of course, James doesn’t usually emerge victorious when going up against Ash, and this time is no different. Having defeated Team Rocket yet again, Ash’s grand prize is honorary citizenship in Crossgate Town, a place he had never visited before and has so far never visited again. At least his Taillow evolved into Swellow during the match against James. Nice job, Ash!

The Showdown in Sinnoh 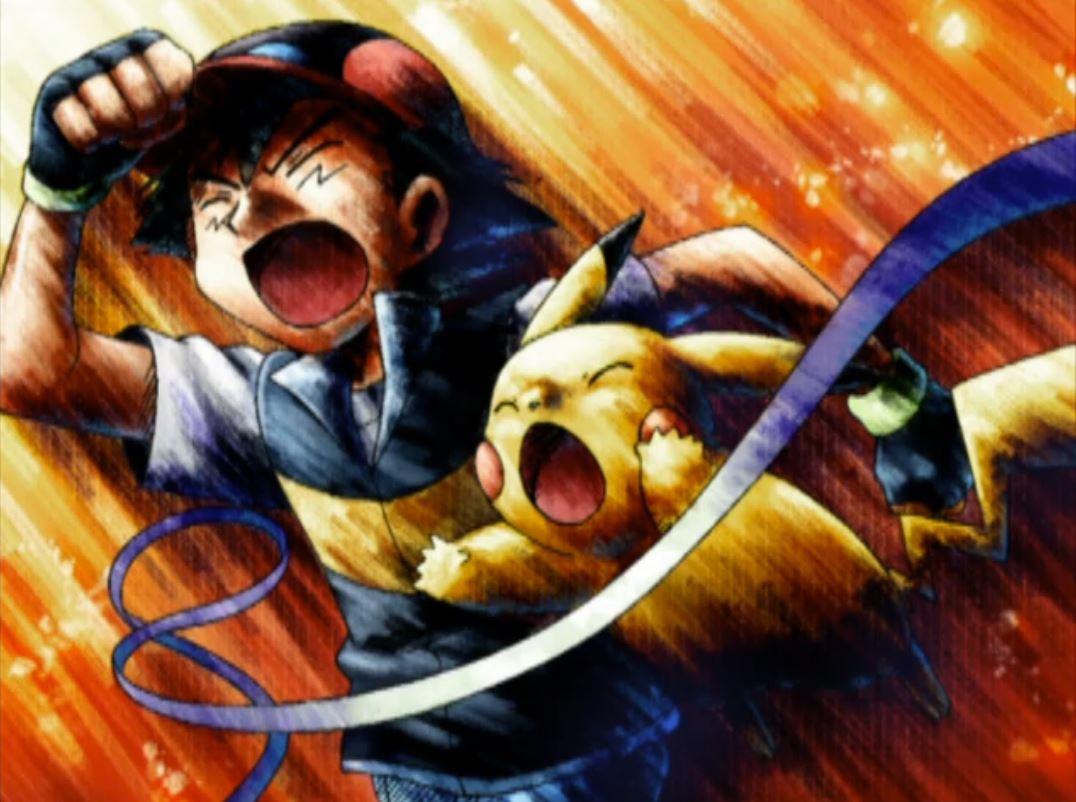 While spending a week at Professor Rowan’s Pokémon Summer Academy, Ash and his friends participate in multiple activities, and the final event is the Pokémon Triathlon (“One Team, Two Team, Red Team, Blue Team!”). Ash is the leader of the Red Team, which also includes his rival, Angie. Each Trainer is determined to reach the finish line before the other. The race comes down to the wire, with Ash and Pikachu neck and neck with Angie and her Shinx. At the last second, though, our heroes burst forward to an exciting victory. Of course, since Ash and Angie are on the same team, their points are combined, meaning their overall team score would be the same no matter who won. But a win is a win in Ash’s book. Way to go, Ash! 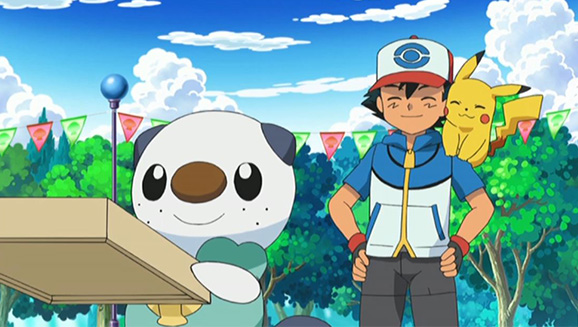 Ash learns of another local competition during his travels through the Decolore Islands. This time, it’s the Scalchop King Competition on Scalchop Island (“Crowning the Scalchop King!”). Every year, various Oshawott and Dewott compete for the title of Scalchop King. Ash and his Oshawott decide to enter the contest, but they must contend with a pompous Trainer named Cadbury and his equally smug Dewott. Following a series of events, the competition ends with a battle between Oshawott and Dewott. The battle is fierce, but Ash’s Oshawott emerges victorious! As the newly crowned Scalchop King, Oshawott is expected to remain on the island (and apart from Ash) for the next year to rule alongside the Scalchop Queen. However, when the Scalchop Queen expresses feelings for Cadbury’s Dewott, Oshawott’s scalchop falls off and breaks, disqualifying the little Pokémon from becoming king. Oshawott may have won the match, but it lost its regal title and the subject of its affection. A bummer to be sure, but for a minute there, victory belonged to our hero. Top-notch effort, Ash!

The Conquest of Kalos 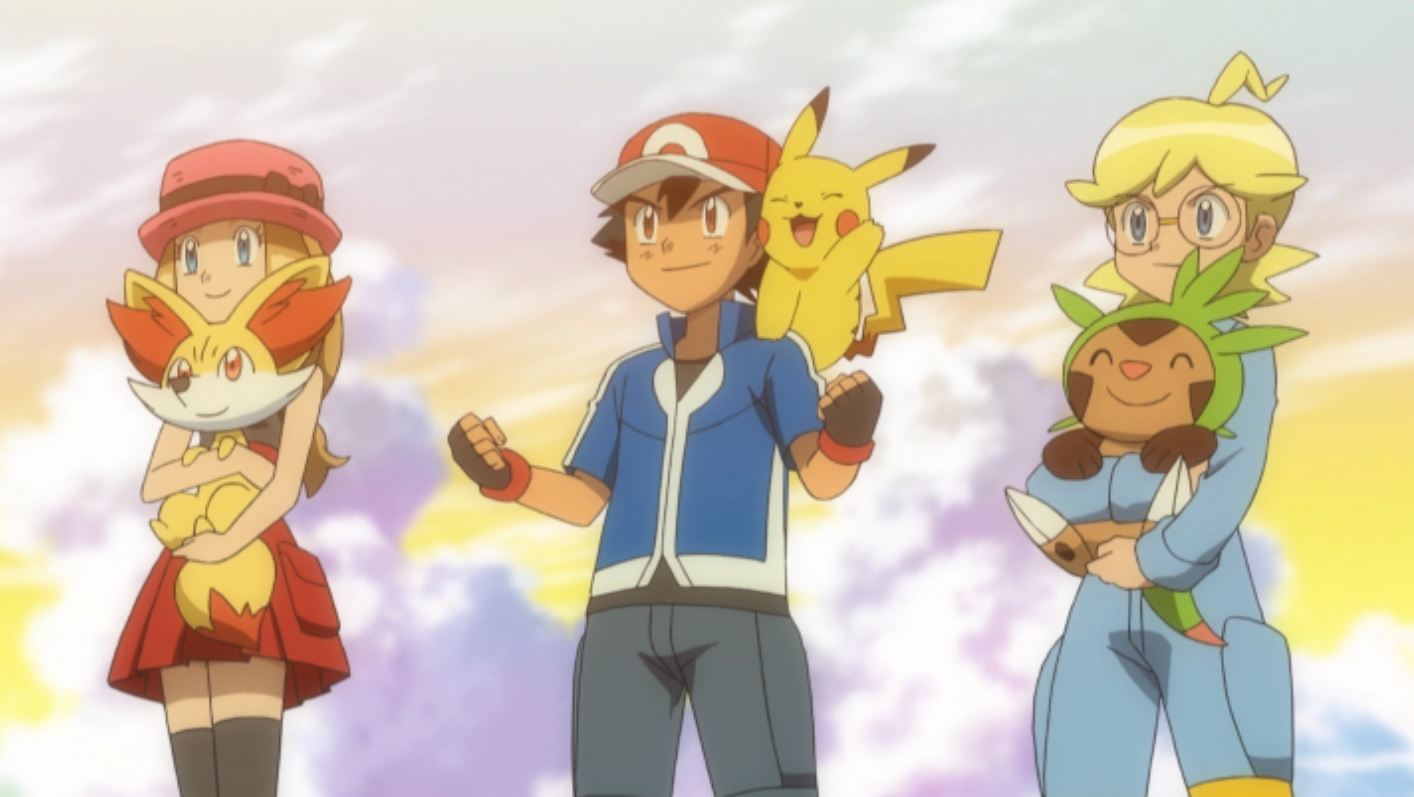 Once again, Ash finds himself engaged in a summertime activity. This time, he’s at Professor Sycamore’s Pokémon summer camp, where he, Serena, and Clemont are on Team Froakie (“Battling into the Hall of Fame!”). Ash’s rival Tierno is on Team Squirtle, alongside Shauna and Trevor. Both teams are in the finals of the camp’s Team Battle competition, where all three members of a team must work together and combine their Pokémon’s moves. Tierno and his squad are exceptionally skilled, but Ash and friends prove that they have what it takes to win! Sure, Ash may not yet have won a Pokémon League Championship, but being entered into a summer camp’s Hall of Fame is almost as good, right? Ash, old boy, you’ve done it again! 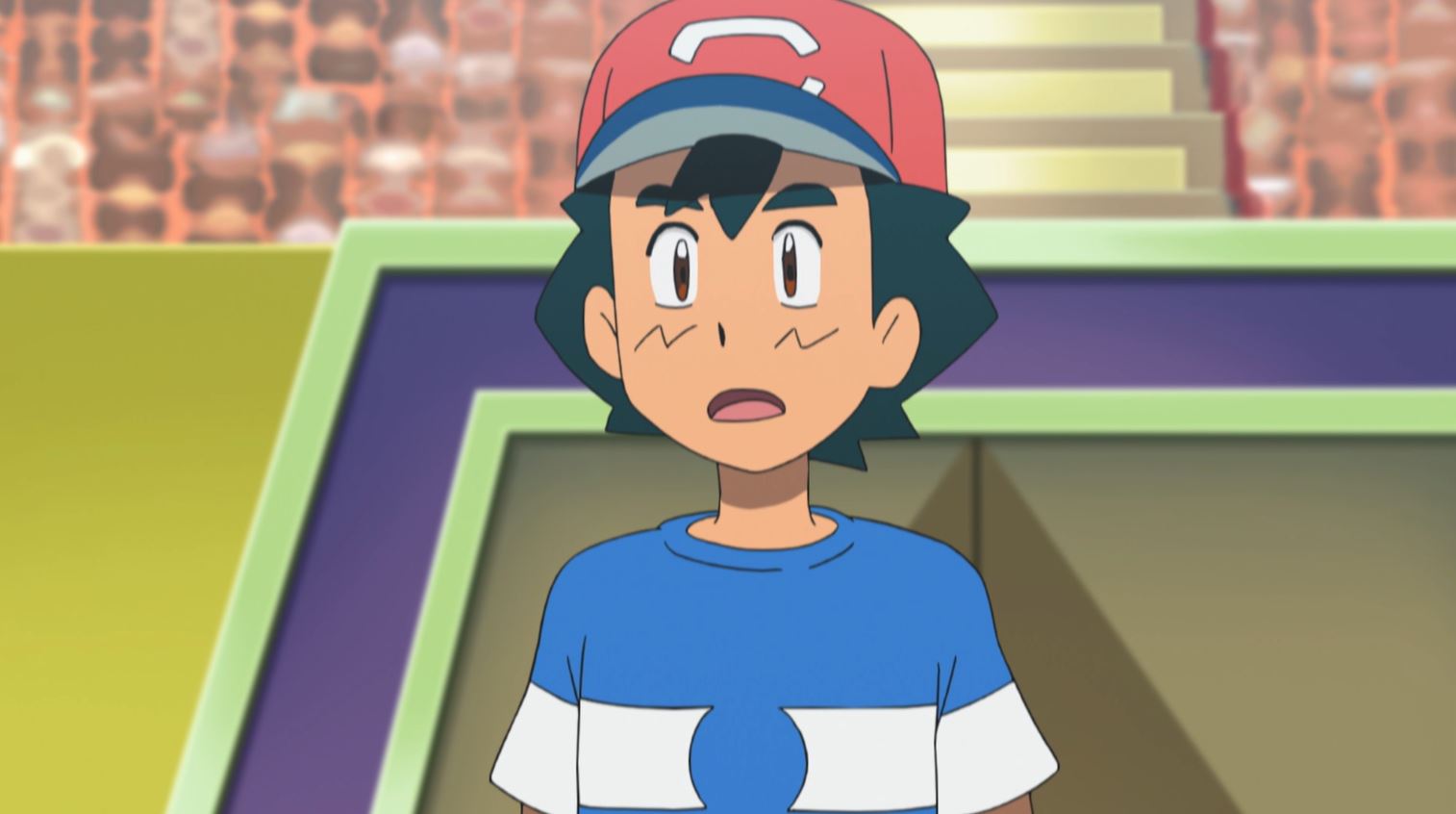 During his time in the Alola region, Ash forms a strong bond with Professor Kukui, who strives to create the very first Alola Pokémon League. After loads of work, Kukui achieves his dream, and Ash is one of the many Trainers who enter the competition with the hope of becoming the region’s first Champion. Ash manages to make it all the way to the finals, where he faces off against his rival Gladion (“Enter the Champion!”). The thrilling battle culminates with Ash’s Dusk Form Lycanroc taking on Gladion’s Midnight Form Lycanroc in an intense showdown! And then Ash—

It’s true! Ash Ketchum, the young Pokémon Trainer from Pallet Town, has achieved his first-ever Pokémon League Championship victory! Even Ash is stunned by the outcome, prompting Gladion to remind him that he’s won. We’re so proud of you, Ash. We know you had it in you!

Of course, this latest victory is hardly the end for Ash. After winning the Alola Pokémon League Championship, he still gets to compete in an exhibition match against the Masked Royal, which should prove incredibly exciting. And from there? Well, who knows what other adventures await Ash as the journey continues?

You can relive most of these classic Pokémon the Series triumphs by tuning in to Pokémon TV. Ash’s Alolan victory has just aired on Disney XD, so look for a rerun on that channel or check back at Pokémon TV a bit later to see the episode again. Remember that you can watch Pokémon TV here on Pokemon.com or using the Pokémon TV mobile app. And don’t forget to watch the conclusion of Ash’s time in the Alola region by catching new episodes of Pokémon the Series: Sun & Moon—Ultra Legends on Disney XD.

Congratulations again, Ash! You’ve earned your place among the greatest Pokémon Trainers of all time!

ICYMI: Our boy finally did it. Ash Ketchum was officially crowned the very first Champion of Alola! 🎉

Join us in celebrating by reliving some of our Kantonian hero’s greatest(?) moments in #PokemonTheSeries on #PokemonTV.