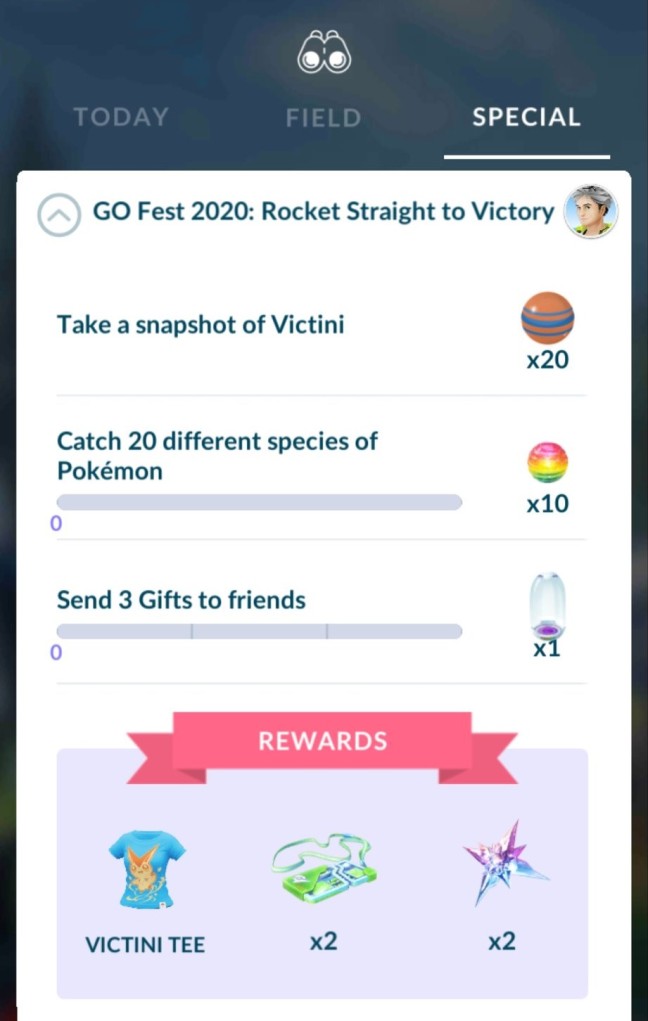 Pokémon GO Fest 2020 is a virtual ticketed event that is taking place on July 25 and July 26 around the world. Read on below to learn more:

Pokémon GO Fest 2020 is upon us! This exciting event will take place on Saturday, July 25, and Sunday, July 26, from 10:00 a.m. to 8:00 p.m. in your local time zone each day. Both days will be filled with activities for players around the globe. Some activities, such as exclusive Special Research lines, will be available only to players who have purchased a ticket, but there will also be plenty of fun for players who don’t purchase a ticket, too.

On Saturday, look forward to rotating habitats that feature a wide variety of Pokémon to battle and catch. The habitats—themed after fire, water, grass, battle, and friendship—will rotate hourly throughout the day. Trainers who have purchased a Pokémon GO Fest ticket will also be able to join the Global Challenge Arena, where players around the world can work together to unlock rewards.

New Pokémon that are available during Pokémon GO Fest 2020 include:

On Sunday, July 26, from 10:00 a.m. to 8:00 p.m. local time, Trainers will enjoy…something very different! Niantic wants the Day 2 experience to be a surprise, so ticket holders will learn what we have in store that very day. There’ll also be another Special Research story for Trainers to enjoy. A new GO Rocket Box is now available with 20 Max Potions, four Rocket Radars, two Star Pieces and 20 Max Revives for 480 PokéCoins.

New Pokémon include the following:

Tickets for Pokémon GO Fest 2020 are now available in the in-app shop. Each ticket is US$14.99, plus taxes and fees where applicable. Tickets cannot be purchased with PokéCoins. You need to purchase only one ticket to fully access both days of the event. Your last chance to purchase a ticket will be July 26, 2020, at 6:00 p.m. in your local time zone, but be aware that if you purchase your ticket after the event starts, you may miss out on some of the earlier content.

Meanwhile, Niantic is investigating the current issue affecting some Trainers that causes lag and other problems with gameplay. The developer apologizes for the inconvenience and says it will provide an update via its official channels when it more information. Due to technical issues that occurred in some of the habitat blocks during Pokémon GO Fest, Niantic will be holding a makeup event at a later date (TBD).

Niantic apologizes for any inconvenience caused and says it will share more information once details have been finalized. Niantic is also investigating technical issues causing problems for some Trainers with social actions such as opening your Friend List and sending invites in Raids. The developer says it will provide an update when it has a resolution. According to Niantic, the technical issues that were causing lag and impacting social actions have been resolved.

Trainers, the rest of #PokemonGOFest2020 weekend is continuing as scheduled, with a follow up make-up event in the future. https://t.co/fBOv0zio6S

Thanks for your patience, Trainers! We're happy to report that the technical issues that were causing lag and impacting social actions have been resolved.

We are investigating technical issues causing problems for some Trainers with social actions such as opening your Friend List and sending invites in Raids. We will provide an update when we have a resolution.