Pokémon the Series: XYZ is now available on Pokémon TV. Read on below to learn more:

Ash, Pikachu, and their friends Serena, Clemont, and Bonnie have been traveling through the Kalos region for a while, but they’re about to experience their most exciting adventures in the region in Pokémon the Series: XYZ, which has just arrived on Pokémon TV. This 19th season of the series has our heroes discovering the secrets of Mega Evolution and facing off against the villainous Team Flare, who hopes to use the energy of the evolutionary technique and the power of the Legendary Pokémon Zygarde to their nefarious ends. And that’s only part of what’s in store for Ash and company as their Kalos region journey draws to a close. Below is a further sample of what you’ll find in this action-packed season, so check it out before you tune in to Pokémon TV to watch the story unfold! 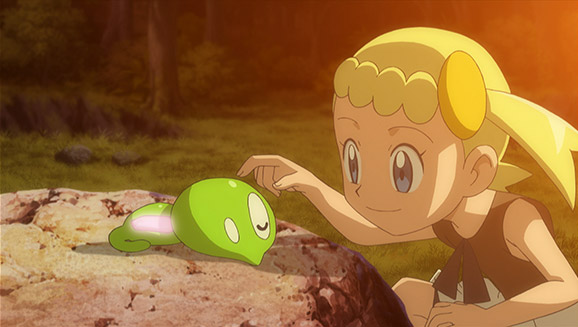 Pokémon the Series: XYZ wastes no time setting up this season’s primary conflict when, in the first episode, Bonnie discovers a small, green Pokémon that she names Squishy (“From A to Z!”). As it turns out, Squishy is a Core of the Legendary Pokémon Zygarde, and it quickly attracts the attention of Lysandre, the boss of the villainous Team Flare, who wants to use the Core in their mysterious Operation Z. Throughout the season, Team Flare continues to pursue our heroes, and we learn more about Squishy’s true nature. The little Pokémon has the ability to merge with Cells to take on a different Forme (“Meeting at Terminus Cave!”), and Ash and friends must battle fiercely to prevent Squishy from falling into Team Flare’s hands. You’ll discover the true nature of Team Flare’s plot and witness an epic battle to save the Kalos region from destruction (“Forming a More Perfect Union!”). 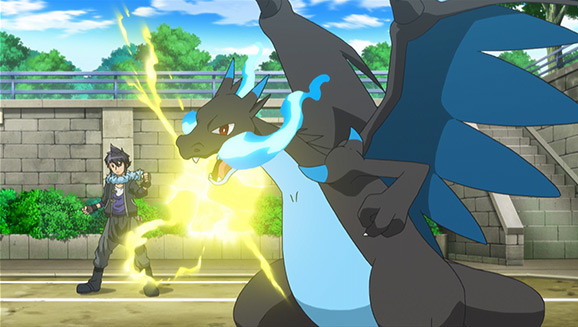 Ash gains a new rival when he crosses paths with Alain, a Pokémon Trainer who is on a journey to study Mega Evolution. When Alain witnesses Ash’s Greninja transform into Ash-Greninja during a battle, he decides to challenge our hero. Greninja takes on Alain’s Charizard, who we discover can Mega Evolve into Mega Charizard X (“A Meeting of Two Journeys!”). Unfortunately, we soon learn that Alain is working with Lysandre and Team Flare (“An Explosive Operation!”). It seems Lysandre requires the energy generated during Mega Evolution to further his schemes. Eventually, Lysandre’s ambitions begin to take shape, and Alain will have some important decisions to make (“A Towering Takeover!”). 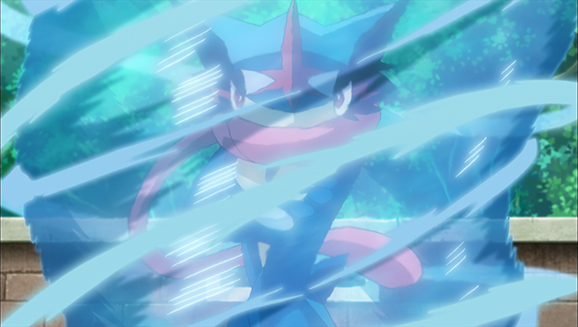 When Ash first arrives in the Kalos region in Season 17, the first Pokémon from the area to join his party is an injured Froakie that he helps (“Lumiose City Pursuit!”). Together, the two have had many adventures, and this Froakie eventually evolves into Greninja while helping to defeat a ruthless ninja adversary (“A Festival of Decisions!”). However, Greninja and Ash appear to share a special bond that not only allows Greninja to become stronger but alters its appearance as well. Ash’s friends work to discover the secret behind the transformation (“The Synchronicity Test!”), which Bonnie dubs “Ash-Greninja” (“All Hail the Ice Battlefield!”). So just what is behind Ash-Greninja’s power? Is it Mega Evolution? Is it something more? You can solve the mystery along with Ash! 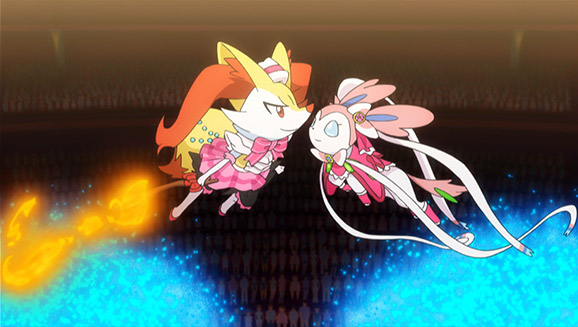 Between the unusual evolutions, friends with questionable alliances, and world-threatening plots, it seems that Pokémon the Series: XYZ solely focuses on big, heavy storylines. But it’s not all “save the world” fare—our heroes get to enjoy some smaller adventures. After all, Serena is still competing in Pokémon Showcases as a Pokémon Performer, where she’s frequently up against another Performer named Jessilee (who is secretly Team Rocket’s Jessie in disguise!). Although nervous, Serena’s Eevee competes in its first Pokémon Showcase (“A Dancing Debut!”), and the Trainer and Pokémon even form bond powerful enough to allow Eevee to evolve into Sylveon (“Party Dancecapades!”). Serena’s skills lead her and her Pokémon to the Pokémon Showcase Master Class, but does she have what it takes to defeat Aria and claim the crown of the Kalos Queen (“Master Class Is in Session!” and “Performing a Pathway to the Future!”)? 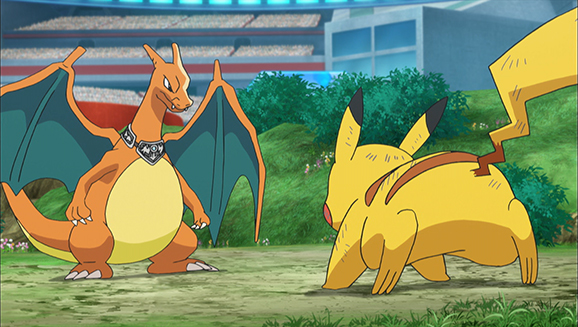 While Serena works to achieve her dreams, Ash, too, has his eyes set on a personal goal—competing in the Kalos League Championships. Upon arriving in Lumiose City, the home of the Kalos League, Ash is reunited with some of his friends/rivals including Tierno, Trevor, Sawyer, and even Alain (“A League of His Own!”). Yes, despite Alain’s ties to Team Flare, Ash inspired him to battle his way into the Kalos League Championships. There are many exciting matches during the Championships, including an intense battle of fiery passion vs. cold analytics when Ash and Sawyer have their long-awaited battle (“Analysis Versus Passion!” and “A Riveting Rivalry!”). Ultimately, it all comes down to a dramatic face-off between Ash and Alain (“Finals Not for the Faint-Hearted!” and “Down to the Fiery Finish!”), but what part does Team Flare have to play?

Pokémon the Series: XYZ is one of the most thrilling seasons of Pokémon the Series yet, and you won’t want to miss a single minute of the action. After all this excitement, Ash could probably use a vacation! You can watch the entire season by visiting watch.pokemon.com or by loading up the Pokémon TV mobile app to enjoy these classic episodes on the go!

Join our heroes on their exciting adventure! Rescuing Zygarde, facing Team Flare, and battling in the Kalos League is all in a day’s work for Ash and Pikachu!

Wrap up the action on #PokemonTV!