The latest batch of episodes of Pokémon Journeys: The Series is now available to watch on Netflix in the U.S. Read on below to learn more:

Catch up on Pokémon Journeys: The Series before watching the latest episodes now available on Netflix.

Fans have an important decision to make. Twelve new Pokémon Journeys: The Series episodes are now available on Netflix effective December 4, 2020, so you can watch the earlier episodes again, immediately watch the new episodes and hope to remember what happened already, or catch up on the key story moments right here before jumping in to the new episodes. Rewatching the previous 24 episodes will take you roughly nine hours—but the story’s so good that you might not mind! If you don’t have the time, however, here’s everything you need to know. 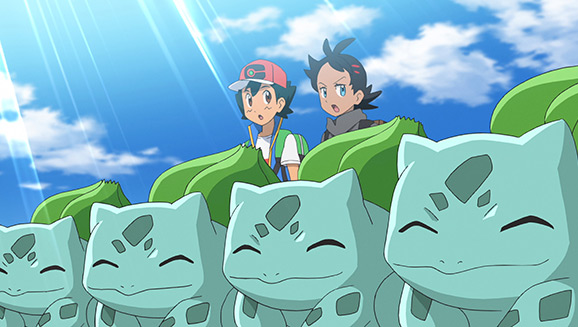 Unlike some previous seasons of the show, Pokémon Journeys: The Series isn’t limited to a specific region of the Pokémon world. At the very beginning of the season, Ash and his new friend Goh are invited to become research assistants at the Cerise Laboratory in Vermilion City (“Legend? Go! Friends? Go!”). Impressed by the exploits of the two young Trainers, Professor Cerise invites Ash and Goh to live at the lab while conducting their research. But these Trainers don’t stick around Vermilion City for very long, as their research takes them across the vast Pokémon world.

Not surprisingly, Ash and Goh are eager Pokémon researchers, and over the course of the season, they witness many incredible moments and meet many fascinating Pokémon! Their most notable research achievements include helping a group of Ivysaur evolve into Venusaur (“Ivysaur’s Mysterious Tower!”) and pursuing rumors of the Legendary Pokémon Ho-Oh to Ecruteak City in Johto (“Finding a Legend!”).

They also researched the migration patterns of Beautifly, during which they were so awestruck that they couldn’t be bothered to catch or battle the Butterfly Pokémon (“Goodbye, Friend!”) and cared for an Egg that hatched into a battle-loving Riolu, making it a perfect addition to Ash’s team (“Caring for a Mystery!”).

As you can see, Ash and his pal Goh are experiencing the world of Pokémon like never before! 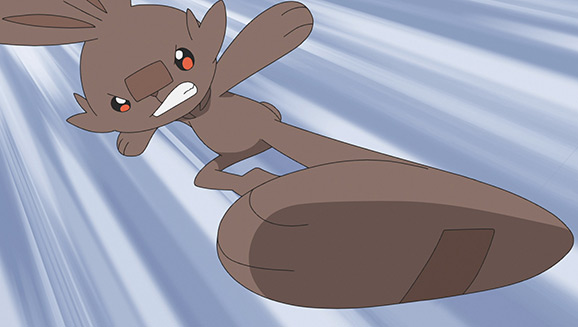 When he was six years old and first caught sight of Mew, Goh insisted that the New Species Pokémon would be the first Pokémon he caught (“Enter Pikachu!”). Goh sticks to his plan until he meets a wild Scorbunny helping a pack of Nickit survive by stealing food for them. Goh and Scorbunny form a bond (“Settling the Scorbunny!”), but it’s not until after Scorbunny bravely helps Ash and Goh prevent a train from running into a sleeping Snorlax that Goh decides to catch Scorbunny (“Mind-Boggling Dynamax!”).

Both Scorbunny and Goh are new to the concept of having a partner, and they encounter several rough patches over the course of their relationship. For example, when Scorbunny has a hard time learning a Fire-type move, Goh doesn’t understand its frustration, causing a rift between them (“Kicking It from Here into Tomorrow!”). Goh and his partner Pokémon remain at odds even after it evolves into Raboot.

Raboot’s apparent fondness for a pack of wild Pokémon convinces Goh that his Pokémon is capable of being happy, but not with Goh as its Trainer. His attempt at leaving his Pokémon behind fails when Raboot shows up on the train with Goh and Ash, much to Goh’s surprise and joy (“Goodbye, Friend!”).

Goh and Raboot are closer than ever, but you’ll have to keep watching where their partnership takes them next! 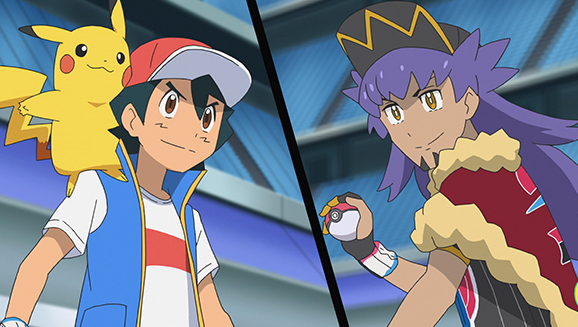 While Goh’s goal is to catch one of every kind of Pokémon (“Working My Way Back to Mew!”), Ash continues his quest to become a Pokémon Master by battling with Pikachu at every opportunity. The pair travel to the Hoenn region to compete in the Battle Frontier Flute Cup (“Serving Up the Flute Cup!”). At first, Goh isn’t very interested in battling. But after watching Ash, Pikachu, and Mimey unexpectedly win the competition, Goh decides battles can be fun!

Ash and Goh travel to the World Coronation Series to watch Lance of the Kanto Elite Four face off against Leon, the undefeated Champion of the Galar region. Leon gets the chance to see Ash and Pikachu battle a wild Gigantamax Drednaw and is impressed, so much so that he agrees to battle them. Ash loses the battle to Leon, and vows to return to eventually defeat the Champion (“The Climb to Be the Very Best!”).

As part of his commitment to a rematch with Leon, Ash enters the World Coronation Series, where more than 10,000 Trainers are battling one another to improve their rankings. Up to this point, Ash has defeated several Trainers with better rankings, but he still has a ways to go. And in a shocking twist, Jessie and James disguise themselves and team up with Ash and Goh to help them defeat another Team Rocket member (“A Little Rocket R & R!”). You’ll have to watch the latest episodes to find out whether this unlikely alliance continues!

These are just some of the incredible storylines to follow in the latest season of Pokémon! Don’t miss the latest collection of Pokémon Journeys: The Series on Netflix now.

Need a refresher before diving into the newest 12 episodes of #PokemonJourneys: The Series on @Netflix? Our guide will catch you up on everything you’ll need to know: https://t.co/ZO9Xuu0d5X pic.twitter.com/pSUcSiRQSA

New Episodes of Pokémon Journeys: The Series on Netflix

Research, battle, and catch Pokémon with Ash and Goh in episodes 25 to 36 of Pokémon Journeys: The Series, now available on Netflix.

Ash and Goh’s adventures across the vast Pokémon world continue with 12 new episodes of Pokémon Journeys: The Series, now available on Netflix. It’s a big, big world, but Ash and Goh are ready to face any challenges they might encounter in episodes 25 to 36—whether in the form of Team Rocket shenanigans, research tasks at the Cerise Laboratory, or battles with their fellow Pokémon Trainers.

In the first 24 episodes of Pokémon Journeys: The Series, Ash and Goh become research assistants at the Cerise Laboratory in Vermilion City and find themselves traveling the Pokémon world studying and training Pokémon. The two discover the wonders of Gigantamax Pokémon, explore Galar’s Wild Area, and even find some common ground with Team Rocket. And while Ash continues his journey to become a Pokémon Master, Goh catches his first Pokémon and discovers that Pokémon battles can be fun. Be sure to check out our full recap of the first half of Pokémon Journeys: The Series before diving into the new episodes!

What adventures await our heroes in episodes 25 to 36? Will Goh ever catch the elusive Mew? Is it possible for Ash and Pikachu to become even better partners? The only way to find out is to stream Part 3 of Pokémon Journeys: The Series on Netflix.

The journey continues with 12 new episodes available on US @Netflix!

3 thoughts on “The Pokémon Company creates full recap of the first half of Pokémon Journeys: The Series”