Look back at the beautiful Kalos region—home of Mega Evolution, origin of Fairy-type Pokémon, and the setting of Pokémon X and Pokémon Y.

This year, we’re celebrating 25 years of Pokémon with a look back at memorable moments from some of the many regions that make up the world of Pokémon. Now our journey has led us to the Kalos region, which was first introduced in Pokémon X and Pokémon Y.

Evolution has always been a pillar of the Pokémon experience. In the Kalos region, however, Trainers discovered a new way to evolve Pokémon called Mega Evolution. This temporary method of Evolution can only be accessed by certain Pokémon that are holding a compatible Mega Stone while their Trainer wields a corresponding Key Stone.

Mega Evolution is a sight to behold, changing the Pokémon’s physical appearance in awesome ways. But Mega Evolution also greatly increases the Pokémon’s power—if caught unaware, your opponent might find themselves in big trouble once you take advantage of this incredible technique. You can only Mega Evolve a single Pokémon once during a battle, but that may be all you need! 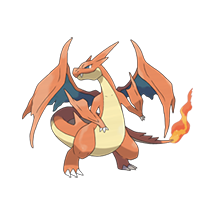 A Mega-Evolved Pokémon might have access to a different Ability, and the process can even alter the Pokémon’s type. The Water- and Flying-type Gyarados, for example, will become Water- and Dark-type once it Mega Evolves. Some Pokémon, like Charizard and Mewtwo, can access different Mega-Evolved forms depending on which Mega Stone they’re holding. Although a Mega-Evolved Pokémon reverts to its previous state once the battle is over, Mega Evolution will always be ready to go in your next match.

Between the power boost and the cool new looks granted to Mega-Evolved Pokémon, it’s no wonder that Mega Evolution is one of the Kalos region’s more memorable aspects. 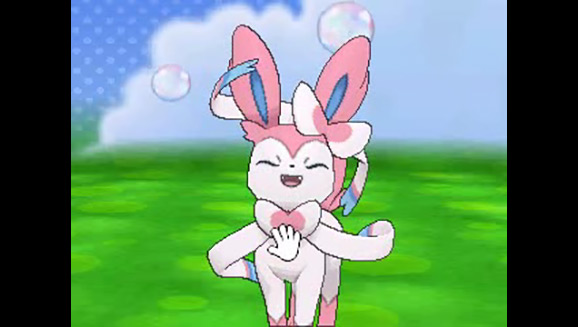 Originally, there were 15 different types of Pokémon: Normal, Fire, Water, Electric, Grass, Ice, Fighting, Poison, Ground, Flying, Psychic, Bug, Rock, Ghost, and Dragon. When the world of Pokémon as we know it expanded into the Johto region, two new Pokémon types (Dark and Steel) were discovered. For a time, it seemed like we had found all the types of Pokémon there were to find—that is, until we arrived in the Kalos region, where we learned of the ever-charming Fairy type. 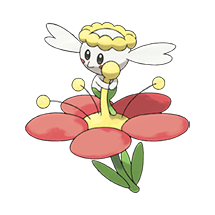 Newly discovered Fairy-type Pokémon in the Kalos region include Flabébé, Spritzee, and an evolved form of Eevee named Sylveon. Kalos was also home to previously discovered Pokémon, like Togepi and Snubbull, that were reclassified as Fairy-type Pokémon. Other Pokémon, such as Jigglypuff and Mr. Mime, were found to be Fairy type in addition to their existing type. And of course, the Laverre City Gym is watched over by Valerie, a Kalos Gym Leader who specializes in Fairy-type Pokémon.

Although they may not all be the most physically powerful Pokémon around, Fairy-type Pokémon tend to have high Special Defense and are immune to damage from Dragon-type attacks. They are also generally very useful against Fighting-type and Dark-type Pokémon. Just keep them away from Pokémon that know Poison-type or Steel-type moves!

Let’s face it, Fairy-type Pokémon are adorable. Who wouldn’t want these cuties on their team? 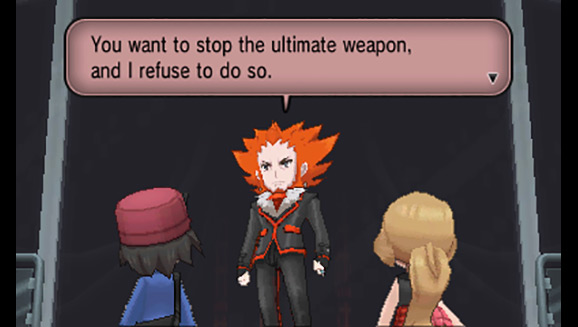 Everyone loves a compelling villain, and the Kalos region has a fantastic antagonist in the form of Lysandre. He stands out in many ways, not the least of which is a shock of red hair that mirrors the mane of his Pokémon partner, Pyroar. When you first meet Lysandre in your Kalos adventure, he’s introduced as an old friend of Professor Sycamore and appears rather friendly. Early on, Lysandre is intrigued by your potential as a Pokémon Trainer and speaks openly about his dreams of a beautiful world.

It isn’t until later that the cracks in his façade are revealed. Not only is Lysandre the boss of Team Flare, but he’s so obsessed with the idea of creating a perfect world that he plans to destroy anyone (human and Pokémon) who is not part of Team Flare. To achieve this “perfection,” Lysandre sets out to activate an ancient weapon by harnessing the power of the Kalos region’s Legendary Pokémon—either Xerneas or Yveltal—leaving it up to you to stop his fiendish plans and save the world.

Throughout his descent into madness, Lysandre continues to admire your skills, and we learn that the Team Flare Boss views his own actions as heroic. He’s convinced himself that humanity has become a scourge on the world, and that eliminating it—and the Pokémon that have become entangled with it—is the only way to restore the natural balance.

Surprisingly, Lysandre’s fate at the end of Pokémon X and Pokémon Y is left ambiguous. He fires his ultimate weapon, but the structure around him is destroyed in the blast, seemingly burying him in the rubble. What a potentially tragic end to a misguided yet extremely memorable character.

No look back on the Kalos region is complete without reflecting on the land itself and the inspiration it draws from the real-world country of France. Given Pokémon X and Pokémon Y‘s theme of beauty—as expressed through fashion, the Fairy type, and Lysandre’s misguided goals—the stunning backdrop of France serves as an ideal basis for the region. 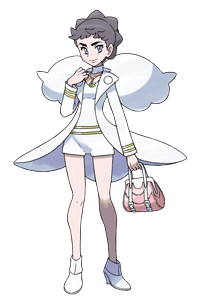 From small, seaside burgs like Cyllage City to the large, bustling metropolis of Lumiose City (which features a towering Pokémon Gym that evokes the grandeur of Paris’s Eiffel Tower), there’s a distinctly European feel to the Kalos region that affects the mood of the entire game.

France and its capital city of Paris have a reputation for glamour and fashion, which is heavily reflected in the people and places that make up the Kalos region. For proof, look no further than Diantha, a Pokémon League Champion who’s also a famous movie star! As for fashion, Pokémon X and Pokémon Y were the first Pokémon games that allowed you to customize your character’s appearance with new outfits, allowing you to reflect your personal style. So why not pick out a new top at a boutique before swinging by a museum or popping into a café for a mid-afternoon snack? 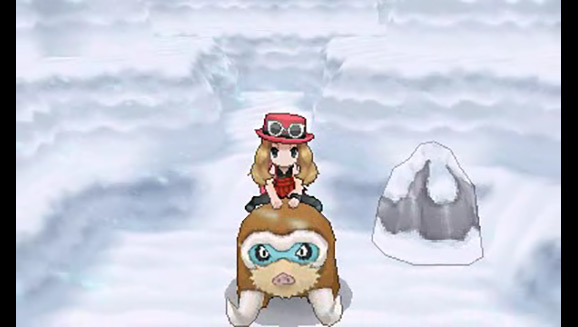 The Kalos region also offered an activity that Pokémon fans had been wanting to do for a long time: ride Pokémon! Riding Pokémon in Kalos is a special event, though—you can’t just go anywhere riding any Pokémon around. But when you do, you’re in for a visual treat!

For example, in previous games, it was possible to travel across water by having a Pokémon in your party use the hidden move Surf. However, this movement was represented by a generic game sprite that didn’t reflect the Pokémon using the move. In Kalos, however, if you have a Lapras that knows Surf, you will be shown taking your maritime trek on the back of Lapras itself. 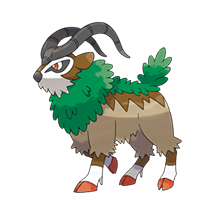 Some of the region’s ridable Pokémon are used to bypass difficult terrain. There’s a Rhyhorn on Route 9 that you can hop on to get over rocky terrain and smash through rocks that block your path. Similarly, a Mamoswine on Route 17 will get you over the snow-covered landscape. It, too, can burst through wayward rocks.

There’s even a farm on Route 12 where you can ride a Skiddo. And when visiting Lumiose City, be sure to tour the town on the back of Skiddo’s evolved form, Gogoat. It’s the only way to see the sights. Of course, the ability to ride Pokémon would be revisited in future games, such as the Alola region’s Poké Rides, but the tradition started in the Kalos region! 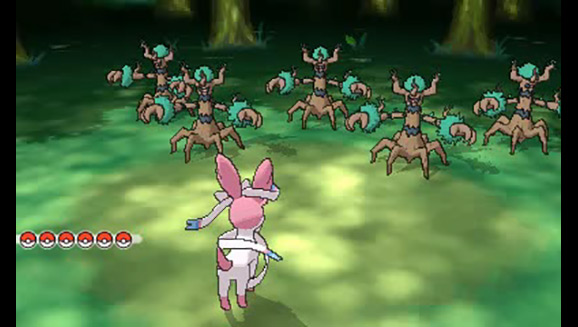 You might need those bonuses when you stumble across one of the Kalos region’s horde battles, where you’re ambushed by five wild Pokémon at once! Fortunately, the Pokémon in these intense battles are usually the same species and are at lower levels than other Pokémon in the vicinity. Even so, facing so many Pokémon at once can be overwhelming if you’re not prepared. Just don’t expect to catch five Pokémon from one encounter—you can’t toss a Poké Ball until only one wild Pokémon remains.