Nintendo has revealed new products for My Nintendo. Read on below to learn more:

A total of 48 remastered courses from throughout the Mario Kart series are racing to the Mario Kart 8 Deluxe game as paid DLC. Courses include those based on real-world locations like Paris Promenade and Tokyo Blur from the Mario Kart Tour game, plus nostalgic favorites like N64 Choco Mountain and Wii Coconut Mall! Content will release in 6 waves of 8 courses from March 18, 2022 until the end of 2023.

Wave 1, which is available on 3/18, features the Golden Dash Cup and Lucky Cat Cup and add courses like Ninja Hideaway, Coconut Mall, and Paris Promenade to the game. 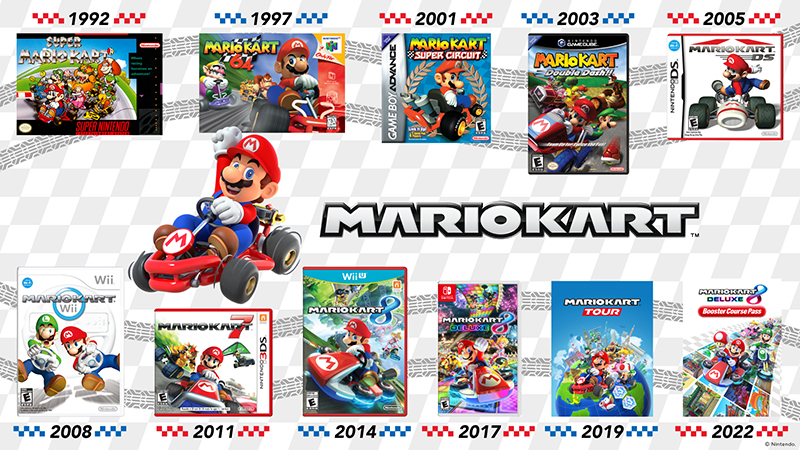 Race through the history of the Mario Kart™ series with this colorful digital wallpaper—redeem your My Nintendo Platinum Points** and download now!

Exclusively for My Nintendo members!

Add a new dimension of fun with these sets of key chains inspired by classic Nintendo 64 games. Now available as My Nintendo physical rewards!

Level up with a paid Nintendo Switch Online + Expansion Pack membership! In addition to all the benefits of a Nintendo Switch Online membership, get access to even more, including a library of Nintendo 64™ games featuring newly added online play for up to 4 players*** (get ready for 4-player, online Mario Kart 64 races), as well as retro SEGA Genesis classics! Plus, get access to the Mario Kart 8 Deluxe – Booster Course Pass* (Mario Kart 8 Deluxe – Booster Course Pass content will start releasing on 3/18/2022, with more being released over time. All content will be released by the end of 2023.) and Animal Crossing: New Horizons – Happy Home Paradise DLC for no additional charge**** ! All the other great benefits of Nintendo Switch Online are also included, such as access to 100+ classic NES™ and Super NES™ games, exclusive online matches in the Tetris® 99 and PAC-MAN™ 99 games, online play in some of your favorite games, and more! Nintendo Switch Online + Expansion Pack 12-month memberships start at $49.99 US which equals out to just over $4 per month!

Available now as #MyNintendo physical rewards! Show off how your other ride is a kart, Arwing, Wing Cap, or a spirited steed with these sets of key chains inspired by classic #Nintendo64 games.https://t.co/vlK4202UvI pic.twitter.com/tEjlZrUPdr