Get the buzz on Bug-type Pokémon, event bonuses, a bug-tastic Collection Challenge, and more.

Pokémon GO is abuzz with Bug-type Pokémon courtesy of the Ultra Unlock: Bug Out event running through August 16, 2022, at 8:00 p.m. local time. Grubbin, the Larva Pokémon originally discovered in the Alola region, makes its thrilling Pokémon GO debut—along with its Evolutions, Charjabug and Vikavolt—giving Trainers a chance to add some new entries to their Pokédex. Meanwhile, Mega Scizor packs a mega pinch in Mega Raids. Venipede is armed with a potent poison, but it’s worth facing for the opportunity to catch a Shiny Venipede in Pokémon GO for the first time. This is also many Trainers’ first chance to catch Pansage, which has previously been found almost exclusively in the Asia-Pacific region of the world. And T is for Trainer—during the event, Trainers can tackle Unown T in one-star raids.

“Bee” sure to complete the Collection Challenge to earn 15,000 XP and the Bug Catcher pose. Throw like a pro throughout the event to earn twice as much XP and extra Candy for catching Pokémon using Nice Throws, Great Throws, and Excellent Throws. Trainers at level 31 and above will also enjoy an increased chance of earning Candy XL for catching Pokémon with Nice Throws, Great Throws, and Excellent Throws.

Swarm with other Trainers to unlock additional bonuses by taking on Raid Battles together. If three or more Trainers join an in-person raid, a specific Bug-type Pokémon will appear for 15 minutes within a 300-meter radius of the Gym. The Pokémon changes each day, so join Raid Battles daily for increased encounters with the following Pokémon.

As always, event-themed Pokémon will appear in the wild, in raids, and hatching from Eggs. For the full list of Pokémon that will be appearing during Pokémon GO’s Ultra Unlock: Bug Out event, check out Niantic’s blog.

Fly or crawl over to Pokémon GO to see what the buzz is about with Bug-type Pokémon, Trainers!

The Bug Out! event returns, bringing Mega Scizor and a new Pokémon debut 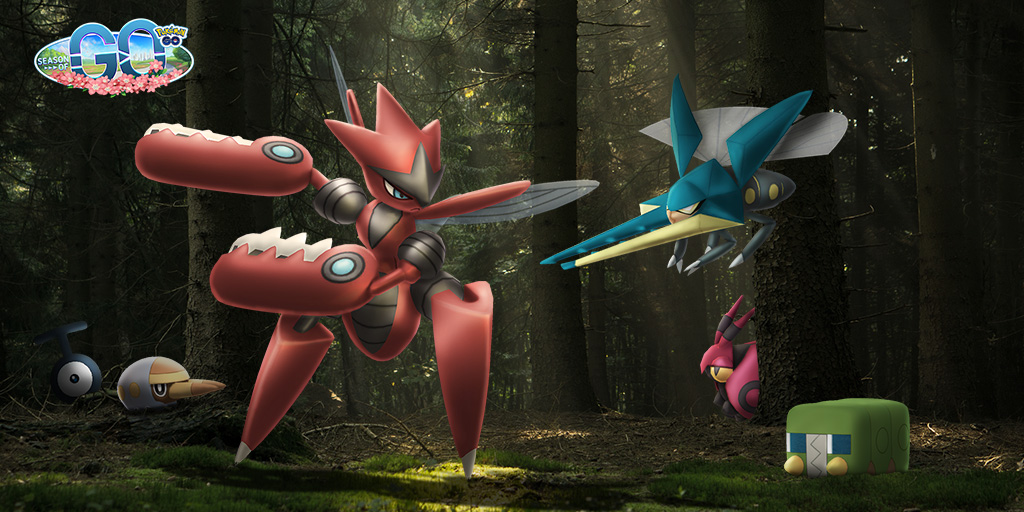 It’s time to celebrate everything cute and creepy-crawly—that’s right, the Bug Out! event is back! Get ready to work on your throws, make progress toward your Bug Catcher medal, and challenge Mega Scizor in Mega Raids!

And, if you can’t get enough of Caterpie or totally love Ledyba, we’ve heard there’s even more to unlock during this event. Maybe Pokémon GO Fest: Sapporo is the key to making this event a little more ultra?

UPDATE: Congratulations, Trainers! Your hard work and catching prowess have metamorphosed the Bug Out! event into Ultra Unlock: Bug Out! Now there’s even more rewards and bonuses!

Grubbin, Charjabug, and Vikavolt will make their Pokémon GO debuts!

Increased chance for Trainers level 31 and up to receive Candy XL for successfully catching Pokémon with Nice Throws, Great Throws, and Excellent Throws.

Unown T will appear in Raid Battles during the Bug Out! event!

Pansage, the Grass Monkey Pokémon, will appear in the wild and in raids around the world during the Bug Out! event!

Get ready for every Bug Catcher’s dream—a Collection Challenge featuring Bug-type Pokémon! Complete the challenge to receive the Bug Catcher Pose and 15,000 XP.

The pose will also be available for purchase in the in-game shop after the event.

Work together with other Trainers to unlock additional bonuses! If three or more Trainers join an in-person Raid Battle, even more of a certain wild Bug-type Pokémon will appear for 15 minutes in a 300-meter radius around the Gym that hosted the raid! The Pokémon that will appear in greater numbers change each day.

Smile! You might have a surprise encounter with a Bug-type Pokémon when you take a photo during the Bug Out! event!

The following Pokémon will appear more frequently in the wild. Also, for the first time in Pokémon GO, you’ll be able to encounter Shiny Venipede—if you’re lucky!

Dewpider
If you’re lucky, you might encounter the following.

The following Pokémon will be available to encounter when you complete Field Research tasks.

Buzz, buzz, buzz…
Ultra Unlock: Bug Out has officially begun! You can work on your Bug Catcher medal and encounter Pansage…or even Unown T!

The Pokémon that will appear in greater numbers change each day! Here’s each swarm’s schedule.

If you’re lucky, you might encounter a Shiny one!#SeasonOfGO

🐝 Combee knows cooperation is key—and so do we! If three or more Trainers join an in-person Raid Battle, even more of a certain Bug-type Pokémon will appear around the Gym that hosted the raid for 15 minutes!

Pansage and a certain unknown Pokémon (😉) will be appearing globally in the wild and in raids during Ultra Unlock: Bug Out!

✂️ Mega Scizor will appear in Mega Raids during the Bug Out! Event happening from August 10 at 10 a.m. to August 16 at 8 p.m. local time.

Swarm together with your fellow Trainers and challenge Mega Scizor!https://t.co/eUl2HvBTbf#SeasonOfGO pic.twitter.com/MFz64Jajuk

Trainers, we updated the schedule of which bug-type Pokémon will be attracted to in-person Raids of three or more Trainers during the Bug Out! event. See the official blog for full details https://t.co/0degQB9PAn

All your buzz about Bug-type Pokémon has caused the Bug Out! event to metamorphose into Ultra Unlock: Bug Out!

Check the blog to see what rewards and bonuses you’ve earned!https://t.co/eUl2HvBTbf pic.twitter.com/qIyQ3Pym9m

Calling all connoisseurs of the creepy and crawly—a Bug-type Collection Challenge is coming!

Complete this limited-time challenge between August 10, 2022, and August 16, 2022, to receive the Bug Catcher Pose and 15,000 XP.#SeasonOfGO pic.twitter.com/GDRoxFsg4F

Here’s a fun Grubbin fact: its strong jaw enables it to scrape trees and slurp out the sap.

How about another: Grubbin will make its Pokémon GO debut during the Bug Out! event!

It’s time to celebrate everything cute and creepy-crawly—the Bug Out! event is back! 🐛🦋#SeasonOfGO pic.twitter.com/qUhCb3AbvF