The newest Pokémon TCG expansion dishes up a tempest of humor, beauty, and imagination.

Atempest might sound ominous with its suggestion of intense and extreme upheaval. In the imaginative hands of the Pokémon TCG: Sword & Shield—Silver Tempest expansion artists, however, a tempest can mean many things: it can become a dance with nature, an exuberance of joy and delight, a collaboration between Pokémon working to fight off or prepare for the weather to come. Embrace the storm with some of the expansion’s highlights, and maybe you’ll even discover a few new favorite cards! 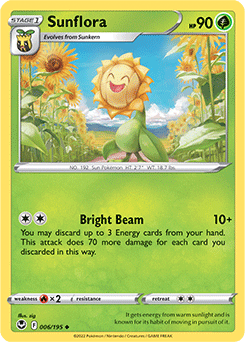 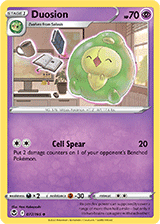 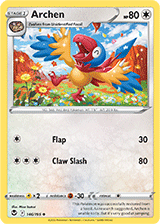 There’s no shortage of happy-looking Pokémon in the Sword & Shield—Silver Tempest expansion. However, a few stand out as being not merely joyful but downright ecstatic. Illustrator zig’s Sunflora basking delightedly in the sun brightens the heart as the days grow darker. And sowsow’s Growlithe seems to be having a euphoric experience frolicking in grassy fields—the wind is ruffling its fur as it literally leaps with joy. Duosion’s psychic power is on full display in artist Pani Kobayashi’s piece capturing the Mitosis Pokémon’s delight at being offered an opportunity to help out around the office. Whether its Trainer shares this sentiment is unknown, but Duosion’s glee is both endearing and catching.

Mareanie might not be known as being especially jovial (outside of a playful encounter with Team Rocket’s James), but illustrator Yuu Nishida captures a rare moment of intense happiness. The Brutal Star Pokémon’s leap above the water is cleverly framed by the sky above and the ocean below, but it’s Mareanie’s expression that steals the show. And it would be impossible to discuss the Sword & Shield—Silver Tempest expansion’s happy campers without mentioning Misa Tsutsui’s Archen, whose obvious bliss is accentuated by lens flares and flower petals. It’s certainly tempting to join the First Bird Pokémon’s dance party in a field of flowers. 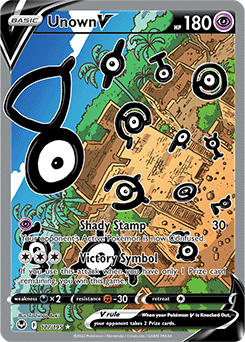 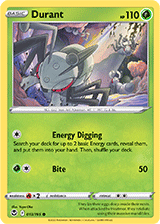 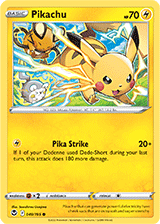 There’s a saying that many hands make light work, and several Pokémon in the Sword & Shield—Silver Tempest expansion seem to have taken that adage to heart. Artist Yuya Oka’s Durant seem to have caught on as a handful of Iron Ant Pokémon dig determinedly, possibly seeking basic Energy cards. Pikachu’s throwing a party, and all the Electric-type Pokémon are invited in Souichirou Gunjima’s electrifying art. We know the Electric Mouse Pokémon can generate quite a charge, but the combined energy from Pikachu, Dedenne, and Togedemaru has got to be off the charts.

Unown are mysterious Pokémon, so it’s difficult to say what illustrator Toshinao Aoki’s Unown V are doing outside those tropical ancient ruins. But given that their power is known to emerge when two or more are together, there’s a great deal of psychic potential here. Jiro Sasumo captures a colorful and rich portrait of life in a Skuntank V den. The pile of fruit in the corner next to two sleeping Stunky indicates the Skuntank have been hard at work. With two Skuntank to share the load, they even have time to investigate a curious Paras and Diglett that have paid them a visit. 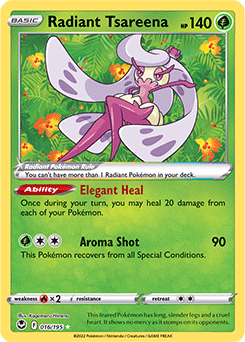 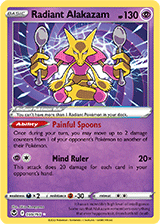 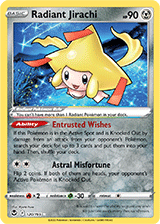 One of the most thrilling things about exploring the Pokémon world is encountering a Shiny Pokémon. And the Sword & Shield—Silver Tempest expansion is full of these alternately colored Pokémon that offer fun and unexpected visual surprises. Illustrator Kagemaru Himeno’s Radiant Tsareena is a lilac vision set against a tropical background that calls to mind the region where the Fruit Pokémon was originally discovered. Radiant Alakazam is pretty in pink as it focuses its mind using its signature spoons in Akira Komayama’s illustration. And last but certainly not least, Radiant Jirachi glows as it sails through a stunning, starry landscape in Ryuta Fuse’s mesmerizing dreamscape. In most cases you don’t have to choose a favorite, but due to a rule that you can only have one Radiant Pokémon in your deck at a time, sadly that is not the case here. 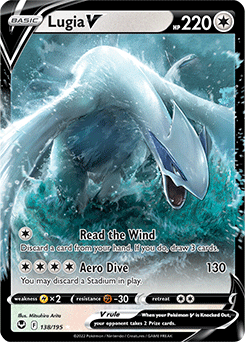 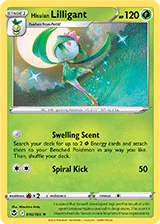 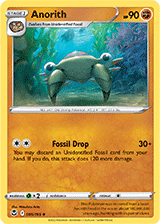 Every Pokémon TCG card tells a story, but, in the hands of a master artist with decades of experience, the picture is so vivid that you can smell the grass beneath Hisuian Lilligant’s feet, feel the warmth of the same sun that Gardevoir basks in, and instinctively shake off the pelting water from an epic storm caused by the flapping of Lugia V’s wings. Hisuian Lilligant is an undeniably elegant Pokémon, but Mitsuhiro Arita’s Spinning Pokémon embodies grace, whimsy, and the beauty of nature silhouetted against the moonlight. The blur of grass beneath its lithe feet and the graceful lift of its petal arms create the impression of having stumbled upon an ephemeral moment.

Arita’s Gardevoir echoes the softness of the previous piece, although where Hisuian Lilligant is a Pokémon in motion, the Embrace Pokémon embodies stillness. A muted but warm color palette and characteristic attention to detail give the viewer the illusion of being able to feel the warmth of sunlight on their face and smell the delightful fragrance of an entire field’s worth of flowers. Like Hisuian Lilligant, Gardevoir’s card art is a celebration of nature, but it has a slightly more meditative approach to the subject.

The artist’s Anorith occupies a rich underwater world of flourishing flora and muted but thoughtful colors. Lastly, Arita’s Lugia V spectacularly delivers the tempest promised in the expansion’s title. While the Legendary Pokémon’s Pokédex entries say that it can quell storms and that it has been known to create them with the flap of its wings, in Arita’s deft hands, Lugia is the storm. It’s all but impossible to tell where the stormy skies end and where the roiling water begins as the Diving Pokémon breaches the surface of the water with all the power and terror of a vengeance deity. As with the artist’s other pieces, the image is so vivid that viewers can sense the tension in Lugia’s wings and feel the cold lash of water as the tempest rages on.

The Evolution of Litten 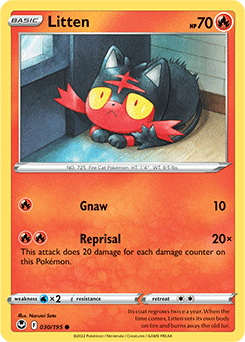 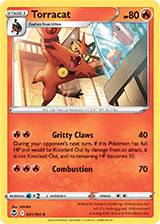 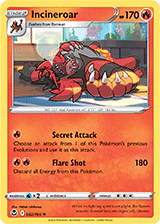 Every Trainer who has brought home a Pokémon for the first time has experienced that brief window of uncertainty as their new friend familiarizes itself with its new home. It takes time to develop trust between a Pokémon and Trainer, and illustrator Narumi Sato’s Litten certainly appears a little worried, with its large eyes and downturned mouth. But there’s no need to be concerned about the Fire Cat Pokémon because artist GIDORA’s Torracat, taking a playful leap at Professor Kukui’s aquarium, seems to have discovered its confidence. The Pokémon’s mischievous expression shows no trace of Litten’s concern, although the Luvdisc sitting in the tank that’s under siege by the Torracat does seem to have taken on a measure of that concern.

But before anyone loses sleep over Luvdisc’s fate, illustrator Hideki Ishikawa captures Incineroar fast asleep in front of the same tank, much to the delight of Luvdisc and Corsola. Not even the sharp claws in the foreground and equally honed fangs on display as it snores can make this Pokémon intimidating. It’s a blissfully cozy domestic scene capturing a happy, contented outcome for Litten, Torracat, Incineroar, Luvdisc, and Corsola.

Find your own favorite artwork and explore your favorite artistic themes with the Pokémon TCG: Sword & Shield—Silver Tempest expansion.