Join us for a look back at the people, places, and Pokémon from the region introduced in Pokémon Gold and Pokémon Silver.

We’re nearing the end of our look back at some of the many regions of the Pokémon world as we celebrate 25 years of Pokémon. Now we arrive at the Johto region, which first appeared in Pokémon Gold and Pokémon Silver and was then revisited in Pokémon Crystal. We would later return to Johto in the reimagined games Pokémon HeartGold and Pokémon SoulSilver. There are a ton of great memories associated with the Johto region, and it was difficult narrowing them down for this retrospective. Join us as we remember what makes us so joyous about Johto! 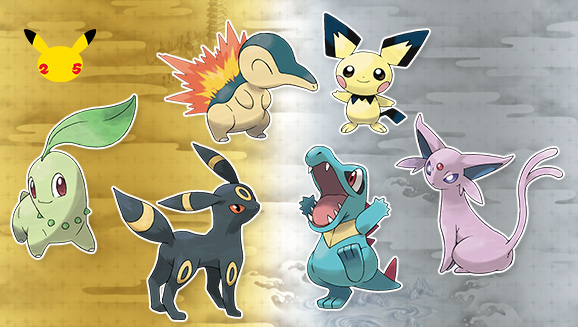 It might be hard to imagine, but when Pokémon Gold and Pokémon Silver were first released, the world of Pokémon was relatively small! At that time, we had only ever explored the Kanto region and met the first 151 Pokémon. So, stepping into the Johto region—a completely new land filled with loads of new Pokémon—was an incredible experience. We had grown so familiar with Kanto’s Pokémon that seeing a huge variety of fresh faces truly felt like we had set off on another incredible journey.

Not only were there new Pokémon, but Johto expanded our view of what Pokémon could be. The region brought us two new Pokémon types: Dark and Steel. Suddenly, our old battle strategies had to be reconsidered and adjusted to make good use of these two new types. We also discovered pre-evolved versions of Pokémon that we first encountered in Kanto, such as Pichu and Igglybuff.

Other Pokémon first discovered in Kanto were found to have Evolutions that were previously unavailable to Kanto Trainers. For example, we learned that Slowpoke could evolve into Slowking and Scyther could evolve into Scizor. And of course, we found out about two new Evolutions for Eevee: Espeon and Umbreon.

The Johto region was also the first place where we got to discover Pokémon Eggs. By dropping off a pair of Pokémon at the Pokémon Day Care, you might be surprised with an Egg later. Pokémon breeding would go on to become a staple of the series as a way to obtain Pokémon with ideal stats for battling.

The Mystery of the Unown 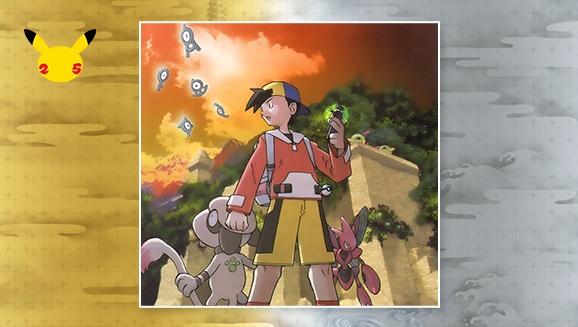 While exploring Johto, you’re bound to come across the Ruins of Alph, a structure that has attracted the attention of multiple scientists in the region. Venture inside and you’ll find multiple chambers containing puzzles that you must solve to reveal ancient drawings of Pokémon. As you complete these puzzles, you’re able to descend deeper into the ruins, where you’ll find the enigmatic Pokémon known as Unown.

Unown were among the first Pokémon to have multiple distinctly different forms—26 variations, to be exact! Although these Psychic-type Pokémon all sport a single large eye and spindly black appendages, each one is shaped like what their Pokédex entry refers to as “ancient writing” (although they also happen to look an awful lot like letters of the Latin alphabet). A further two, which resemble a question mark and an exclamation point, were later discovered later in the Hoenn region.

In fact, messages written with Unown shapes were scattered throughout the ruins for you to decode. Further adding to the mystery of both the Unown and the Ruins of Alph, if you use the radio function of your Pokégear device within the ruins, you can detect mysterious transmissions that add to the curious atmosphere of your surroundings.

The Ruins of Alph is an intriguing side quest as you journey through the Johto region. It gives you the feeling of discovering secrets that have been left untouched for ages, and the plethora of Unown forms within are great for Trainers who love collecting Pokémon. 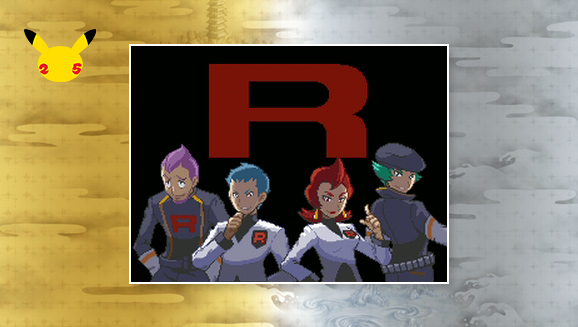 Team Rocket caused plenty of trouble in the Kanto region, but when their boss, Giovanni, was defeated, they refused to fade away. Instead, the villainous group redoubled their efforts as they moved into the Johto region. Throughout the course of your adventure, you’ll cross paths with Team Rocket on multiple occasions, and you’ll work to thwart their wicked ambitions.

The team’s first unsavory scheme involves them swiping Slowpoke to harvest their tails for sale on the black market. They later set up a hideout in Mahogany Town where they use sound waves in an attempt to control Pokémon. These signals have infuriated a rare red Gyarados that resides in the Lake of Rage just north of the town. (Oh, yes, Johto also featured Shiny Pokémon for the first time.)

Ultimately, you’ll face off against Team Rocket in Goldenrod City’s Radio Tower, which they’ve taken over in an attempt to contact the missing Giovanni via their own broadcasts. There are four Team Rocket Executives you’ll have to defeat before they vow to disband for good, but can you really trust the word of a Team Rocket member?

Time Is of the Essence 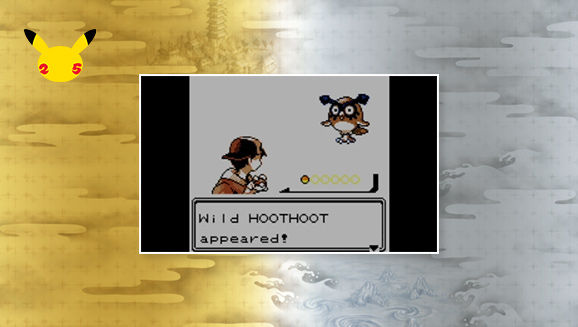 The Johto region operates on a strict timeline that just so happens to coincide with the flow of time in the real world. An in-game clock keeps track of the current time and the day of the week, both of which affect events in Johto. Some Pokémon, for instance, are more active during the day, while others are nocturnal, meaning you’ll have to venture out after dark to catch them. In fact, the deciding factor on whether Eevee will evolve into Espeon or Umbreon in the Johto region is dependent on what time of day it is when you form a solid friendship with the Evolution Pokémon.

There’s a set of seven siblings in Johto, and each one only appears on a particular day of the week. They’ll give you useful items for your Pokémon, so it’s worth taking the time to track them all down. There are many other things to discover on different days of the week, too, such as rotating music that plays on the Pokégear’s Pokémon Music Channel, various Trainers who wait to challenge you on specific days, and whether you can enter the Bug-Catching Contest at the National Park (every Tuesday, Thursday, and Saturday!).

Learning that time was now a factor in your Pokémon journey added a greater sense of depth to the experience. The world of Pokémon suddenly felt more alive when you knew that the both the human and Pokémon residents of the Johto region kept going about their business even when your game was turned off.

Returning to the Kanto Region 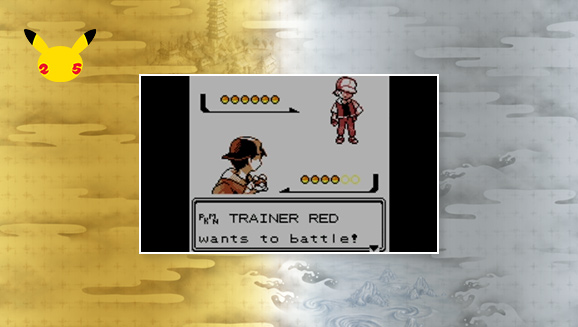 Yes, there are lots of memorable moments in Johto, but anyone who has ever defeated the region’s Pokémon League Champion knows what the most memorable moment is. By chatting with Professor Elm after returning home, he’ll give you a ticket to board the S.S. Aqua in Olivine City. This ship will take you to Vermilion City, the port town in the Kanto region! Suddenly, your Johto region adventure includes a detour to the place where it all started.

This version of the Kanto region may be slightly condensed compared to the land you explored in Pokémon Red and Pokémon Blue, but it’s still amazing getting to revisit familiar locations as a sort of victory lap to your recent Johto region win. Interestingly enough, some Johto region Pokémon migrated to Kanto, allowing you to catch them there as well. You can even face off against the Kanto region Gym Leaders to add their Badges to your collection.

Once you have all the Kanto and Johto region Badges, prepare for the ultimate challenge. Inside Mt. Silver in the Johto region, which can be accessed via Route 28 in Kanto, you’ll find Red, the main character from Pokémon Red and Pokémon Blue. The famously taciturn Trainer will challenge you to a battle, so make sure you’re prepared to face his powerful Pokémon team. 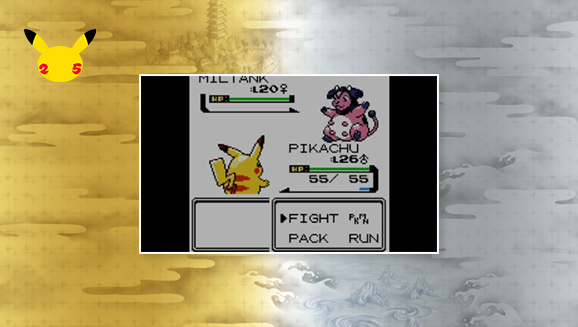 We couldn’t let a Johto retrospective go without mentioning the incredible Legendary Pokémon that inhabit the region. During your travels through the land, you’ll find two towers in Ecruteak City that—according to legend—were once home to Lugia and Ho-Oh. When one of the towers burned down, though, the Pokémon are said to have vanished. Perhaps you can solve the mystery of their disappearance and return the Legendary Pokémon to their former homes.

The story of Lugia and Ho-Oh is also closely tied to that of three other Legendary Pokémon in the Johto region: Raikou, Entei, and Suicune. It is said that Ho-Oh resurrected the trio when its tower burned down. You will first encounter these three Pokémon in the Burned Tower, but they’ll run off before you can battle them. From that point on, they freely roam the Johto region, waiting for you to track them down.

And, oh dear, we’ll leave you with our memories of being humbled by Whitney, the Goldenrod City Gym Leader—specifically, our memories of her Miltank repeatedly wiping out our Pokémon party with its unexpectedly powerful Rollout attack. For such a cute and innocent looking Pokémon, ol’ Miltank is capable of dishing out a lot of punishment.

There’s still one more region to visit as we continue our tour through the world of Pokémon. Check back soon—we’ll be heading to where it all began. That’s right, you won’t want to miss our retrospective of the Kanto region as we continue to celebrate 25 years of Pokémon!

The Johto region is home to many memorable moments—let us know your favorite Johto memories below and check out our favorites here! https://t.co/GDsKHpbIqM pic.twitter.com/IekriYPD7W

18 thoughts on “The Pokémon Company looks back at the people, places and Pokémon from the Johto region introduced in Pokémon Gold and Silver”