Team GO Rocket returns for another take-over, and they’ve brought a bunch of Shadow Pokémon.

When more Pokémon first found in the Alola region began appearing in Pokémon GO, it was cause for celebration. Unfortunately, these Pokémon have also attracted the attention of some notorious villains. From Sunday, April 3, 2022, at 12:00 a.m. until Thursday, April 7, 2022, at 11:59 p.m. local time, Team GO Rocket will return for another take-over! You’ll find these foes more frequently at PokéStops and in balloons.

During this troublesome take-over, Giovanni will be ready for action with an unexpected Pokémon partner—Shadow Latias. There will be a new Special Research story that awards a Super Rocket Radar, which can be used to chase down the Team GO Rocket Boss for a battle. Of course, Giovanni isn’t the only threat. Team GO Rocket Grunts and their leaders—Sierra, Cliff, and Arlo—will be on the scene as well, with a fresh supply of Shadow Pokémon in need of rescue. During the event, you can use a Charged TM to help a Shadow Pokémon forget the Charged Attack Frustration.

Completing Field Research tasks during this event can earn you an encounter with Sneasel or, if you’re lucky, Scraggy.

Thwart Team GO Rocket’s efforts and catch a lot of Pokémon? That sounds like a win-win! 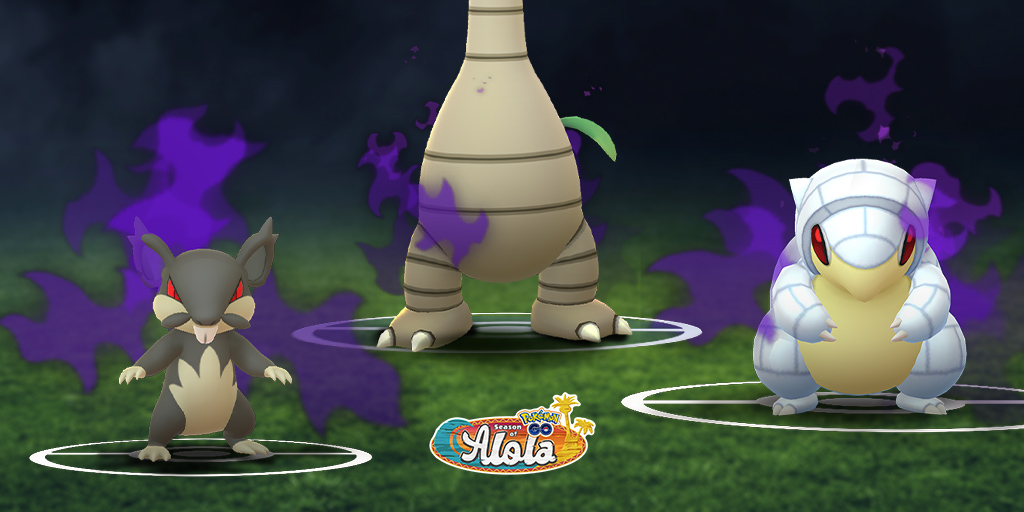 Another Team GO Rocket takeover is happening! Spurred by the recent influx of Pokémon first found in the Alola region, Team GO Rocket is feeling bolder than ever. This time, the villains are trying to prepare for their upcoming company-wide Team GO Rocket Retreat!

Salandit and Salazzle make their debuts in Pokémon GO!

Starting with this event, Salandit will be available to hatch from 12 km Eggs.

You can use 50 Salandit Candy to evolve female Salandit into Salazzle.

Giovanni never rests on his laurels. The Boss is back—and he’s got Shadow Latias in tow! A new Special Research story will be available at the beginning of this event. Progress through it to receive a Super Rocket Radar, and chase down Giovanni!

Team GO Rocket Grunts, as well as their Leaders—Sierra, Cliff, and Arlo—are also using different Shadow Pokémon. Help Spark, Blanche, and Candela overcome their adversaries and rescue the Shadow Pokémon! If you’re lucky, you may encounter different Shiny Shadow Pokémon than normal, too!

Shadow Numel
If you’re lucky, you may encounter a Shiny one!

Team GO Rocket will be appearing more frequently at PokéStops and in balloons.

You can use a Charged TM to help a Shadow Pokémon forget the Charged Attack Frustration.

Sneasel
If you’re lucky, you might encounter the following.

As more Pokémon originally found in the Alola region appear, Team GO Rocket felt the need to reappear, too… 😈

What could they be up to? 🤔#SeasonOfAlola

3 thoughts on “Salandit and Salazzle debut in Pokémon GO, and Giovanni brings Shadow Latias, Team GO Rocket returns for another take-over and they’ve brought a bunch of Shadow Pokémon”